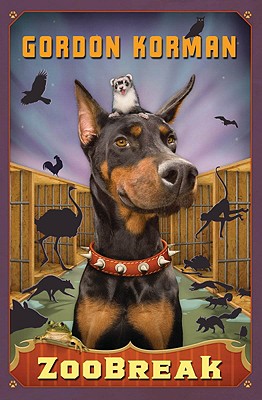 By Gordon Korman
$17.99
Availability to be confirmed

The sequel to Gordon Korman's SWINDLE - the Man With A Plan is back
When Griffin Bing's class goes to a floating zoo, they don't expect to see animals being treated so badly. They don't expect to find Cleo, Dog Whisperer Savannah's pet monkey who's been missing for weeks. And they really don't expect to have to hide the animals once they've rescued them Hilarity ensues as Griffin's team once more pulls off a heist...trying to break the animals back into a (better) zoo.

Gordon Korman is the author of The 39 Clues Book 2: One False Note, which debuted at #1 on the New York Times bestseller list, and The 39 Clues Book #8: The Emperor's Code. Gordon has written more than sixty books for kids and young adults, including Zoobreak, Swindle, and Son of the Mob, as well as the On the Run series and the Island, Everest, Dive, and Kidnapped trilogies. A native of Ontario, Canada, Korman now lives with his family in Long Island, New York.