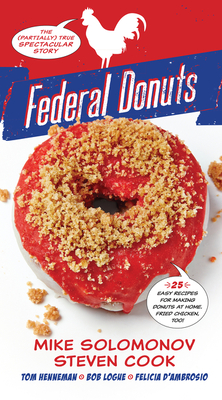 A zany chronicle of the rise of America’s hottest donut mini empire—with recipes—by the authors of Zahav, the James Beard 2016 Book of the Year

“We knew absolutely nothing about making donuts.” So begins this quirky story of how two James Beard Award winners hatched a harebrained idea that resulted in a mini empire and turned Philadelphia into a donut destination. Federal Donuts is at once an ode to an American passion and a collection of recipes for the cult-favorite hits.

With a wad of cash in hand and a dream, Solomonov and Cook meet a Craigslist stranger in a parking lot and buy a used “donut robot.” It would do all the rest, right? Regrets, partially raw donuts, and long lines ensue, but soon the partners work out the kinks and develop an exquisite dough delicately spiced with Middle Eastern aromatics. Strawberry lavender, guava poppy, pomegranate Nutella, and salted tehina are just a few of the imaginative flavors featured in this book. Also included are all the tips needed for making foolproof donuts at home. There is even a bonus recipe for the other specialty of “Fednuts”: shatteringly crisp Korean-style fried chicken.

MICHAEL SOLOMONOV, the executive chef of Zahav, named an “essential” restaurant by Eater, is the 2017 James Beard Outstanding Chef in America and the 2016 Eater Chef of the Year. STEVEN COOK, his business partner, and SOLOMONOV wrote Federal Donuts and the award-winning Zahav. Together, they own Zahav, Federal Donuts, Abe Fisher, Dizengoff, The Rooster, and Goldie restaurants.