How To Grill Everything: Simple Recipes for Great Flame-Cooked Food: A Grilling BBQ Cookbook (How to Cook Everything Series #8) (Hardcover) 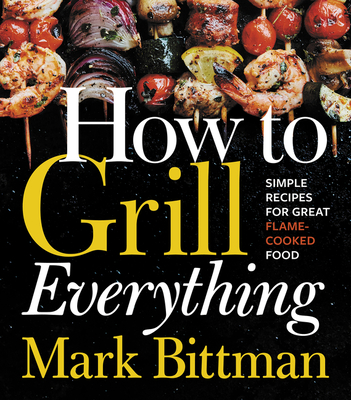 How To Grill Everything: Simple Recipes for Great Flame-Cooked Food: A Grilling BBQ Cookbook (How to Cook Everything Series #8) (Hardcover)

This is book number 8 in the How to Cook Everything Series series.

Here’s how to grill absolutely everything—from the perfect steak to cedar-plank salmon to pizza—explained in Mark Bittman’s trademark simple, straightforward style. Featuring 1,000 recipes and variations, plus Bittman’s practical advice on all the grilling basics, this book is an exploration of the grill’s nearly endless possibilities. Recipes cover every part of the meal, including appetizers, seafood, meat and poultry, vegetables (including vegetarian mains), and even desserts. Plenty of quick, high-heat recipes will get dinner on the table in short order (Spanish-Style Garlic Shrimp, Green Chile Cheeseburgers); low and slow “project” recipes (Texas-Style Smoked Brisket, Pulled Pork with Lexington BBQ Sauce) are ideal for leisurely weekend cookouts. You’ll also find unexpected grilled treats like avocado, watermelon, or pound cake, and innovative surprises—like cooking meat loaf or from-scratch Rosemary Olive Oil Bread on the grill—to get the most out of every fire.
MARK BITTMAN is the author of more than thirty books, including the How to Cook Everything series and the #1 New York Times bestseller VB6: Eat Vegan Before 6:00 to Lose Weight and Restore Your Health . . . for Good. He was a food columnist, opinion columnist, and the lead magazine food writer at the New York Times, where he started writing in 1984 and remained for more than thirty years.

Bittman has starred in four television series, including Showtime’s Emmy-winning Years of Living Dangerously. He is a longtime Today regular and has made hundreds of television, radio, and podcast appearances, including on Jimmy Kimmel Live!, Real Time with Bill Maher, and CBS’s The Dish; and on NPR’s All Things Considered, Fresh Air, and Morning Edition.

Bittman has written for countless publications and spoken at dozens of universities and conferences; his 2007 TED talk “What’s wrong with what we eat?” has almost five million views. He was a distinguished fellow at the University of California, Berkeley, and a fellow at the Union of Concerned Scientists. He has received six James Beard Awards, four IACP Awards, and numerous other honors.

Bittman is currently special advisor on food policy at Columbia University’s Mailman School of Public Health, where he teaches and hosts a lecture series. He is also the editor in chief of Heated. His most recent book is his history of food and humanity, Animal, Vegetable, Junk.

"Bittman’s broad coverage and clear instructions yield a wealth of reliable, practical dishes well within the range of even novice grillers. Although the book contains 1,000 recipes, Bittman doesn’t overwhelm... his easy-to-execute recipes and imaginative approach is unassailable. Regardless of one’s grilling experience, fans of outdoor cooking will find this volume to be essential." —Publishers Weekly, STARRED review —