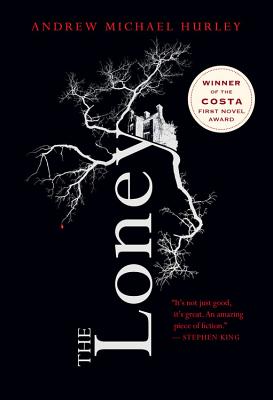 
Availability to be confirmed
The eerie, suspenseful debut novel — hailed as “an amazing piece of fiction” by Stephen King — that is taking the world by storm.

When the remains of a young child are discovered during a winter storm on a stretch of the bleak Lancashire coastline known as the Loney, a man named Smith is forced to confront the terrifying and mysterious events that occurred forty years earlier when he visited the place as a boy. At that time, his devoutly Catholic mother was determined to find healing for Hanny, his disabled older brother. And so the family, along with members of their parish, embarked on an Easter pilgrimage to an ancient shrine.   But not all of the locals were pleased to see visitors in the area. And when the two brothers found their lives entangling with a glamorous couple staying at a nearby house, they became involved in more troubling rites. Smith feels he is the only one to know the truth, and he must bear the burden of his knowledge, no matter what the cost. Proclaimed a “modern classic” by the Sunday Telegraph (UK), The Loney marks the arrival of an important new voice in fiction.

"This impressive first novel is luxuriously written, with dialogue springing from richly developed characters. “The Loney” has won awards and accolades from such reviewers as horror master Stephen King (“It’s not just good, it’s great”) and won the Costa First Novel Award, among other distinctions. Nothing about it disappoints." — Minneapolis Star Tribune

"If you are wilting in the heat, you could cool off with the chilly The Loney by Andrew Michael Hurley."—Shelf Awareness

"Hurley’s powerful prose and his intense sense of place and character bring to mind the best that the Gothic fiction genre has to offer. Read it before booking that cottage on the coast." — KQED

“The weather of The Loney is English—overcast, thick with ambiguity—and when the heavens open nothing can protect you. It’s an atmosphere for ghosts, for slaughtered animals, for pagan rituals, but Hurley, unexpectedly, uses this lowering horror-movie place as the setting for a serious drama about the nature of faith. The terrors of this novel feel timeless, almost biblical: There are abominations here, and miracles.”—Terrence Rafferty, New York Times Book Review

“Andrew Michael Hurley's debut has a sense of menace from the first page and builds into a creepy tale that explores deep questions of faith and doubt.”—Shelf Awareness

"Fans of Shirley Jackson are sure to savor Andrew Michael Hurley’s Gothic horror novel The Loney...tight, suspenseful writing makes this masterful novel unsettling in the most compelling way."—Nancy Hightower, The Washington Post

"Andrew Michael Hurley’s “The Loney” is such a superb piece of writing that it’s hard to believe it’s his first novel. This deep and engrossing gothic novel about love, religion, the supernatural and family defies expectations...this is a book to slow down and enjoy, to relish how Hurley sets the mood, raises serious themes, and never ceases to entertain. I’m excited to see what he writes next."—The Missourian

"Terrifying debut novel...contains dark, unexpected depths, which only really reveal themselves long after his evocative prose has led you far from shore."—Entertainment Weekly

"In his thoroughly engrossing debut novel, British writer Andrew Michael Hurley provides a chilling masterclass in gothic suspense...The Loneyis a novel of innocence lost—a brooding, beautifully composed saga that will chill you to your bones."—Bookpage

"One of the strongest aspects of the book is Hurley’s deeply evocative (but not overly-descriptive) prose, which is so atmospheric that the titular location’s gray, humid, and bitter air seems to palpably permeate every page...a most impressive and haunting debut deserving of its high praise, The Loney is a memorable tale of curiosity, fear, faith, and sorrow. With appropriately dreamlike lucidity, Andrew Michael Hurley delicately peels back layers of secrets and beliefs to reveal a twisted heart of darkness that is sure to leave the reader with a shiver."—The New York Journal of Books

“The setting is amazing. The cast of characters is freaking weird and out of their time but also very believable. And there's this completely terrifying thing that's going on and half the time you just don't know what it is. There's a boy and his brother, who has a developmental disability, who go every year on a very strange pilgrimage to this unspecified marshy place called The Loney. One year they go strange things start happening and they encounter locals who are at first helpful and then become quite sinister and frightening very quickly.”—Paula Hawkins, author of The Girl on the Train, digitalspy.com

“This impressive first novel is luxuriously written, with dialogue springing from richly developed characters. . . . Nothing about it disappoints.” —Minneapolis Star Tribune

“A palpable pall of menace hangs over British author Hurley's thrilling first novel, narrated by a London boy, "Tonto" Smith, whose affectionate nickname was bestowed by a parish priest who likened himself to the Lone Ranger. Tonto and his family undertake an Easter pilgrimage to the Moorings, a house overlooking a treacherous swath of tide-swept Cumbrian coast known as the Loney. Smith's devoutly Catholic mother hopes that taking the waters at the nearby shrine will cure his older brother, Hanny, of his lifelong muteness. But the Cumbrian landscape seems anything but godly: nature frequently manifests in its rawest state and the secretive locals seem beholden to primitive rites and traditions that mock the religious piety of the visitors. Adding to the mystery is Coldbarrow, a spit of land turned twice daily by the tides into an island, where a man, a woman, and a pregnant teenage girl have taken refuge in a gloomy house named Thessaly. Hurley (Cages and Other Stories) tantalizes the reader by keeping explanations for what is happening just out of reach, and depicting a natural world beyond understanding. His sensitive portrayal of Tonto and Hanny's relationship and his insights into religious belief and faith give this eerie tale depth and gravity.”—Publishers Weekly (starred review)

"When a landslide during a winter storm reveals the body of an infant, the desolate Lancashire coastline known as the Loney is in the news, and the narrator called Smith realizes he must tell the story of his past there. Thirty years earlier Smith’s family and other church members undertook an Easter pilgrimage to an old shrine in order to “heal” his mute brother Hanny and reconvene with God. However, the adventure was one of clashing attitudes, strange locals, loud noises in the night, hidden locked rooms, and miracles that may not have been God’s will at all.  First-time novelist Hurley weaves an intricate story of dark mystery and unwavering brotherly love that lends itself to many rereads. The characterizations are superb; even the Loney becomes a distinct character as it seems the place, not the people, is to blame for the bizarre happenings. Also, while religion plays a major role, the reference is more an observation of traditions. VERDICT This eerily atmospheric and engrossing novel will captivate readers who like their fiction with a touch of the gothic."—Library Journal, editor's pick

“The Loney is one of the best novels I’ve read in years. From the very first page, I knew I was in the hands of a master. Atmospheric, psychologically astute, and saturated with the kind of electrifying wrongness that makes for pleasurably sleepless nights.” —Kelly Link, author of Get In Trouble

“The Loney is a stunning novel—about faith, the uncanny, strange rituals, and the oddity of human experience. Beautifully written, it’s immensely entertaining, but also deep and wide. A moving evocation of desolate wilderness and a marvel of complex characterization, The Loney is one of my favorite reads of the past couple of years.” —Jeff VanderMeer, New York Times bestselling author of the Southern Reach trilogy

“Here is the masterpiece by which Hurley must enter the Guild of the Gothic: it pleases me to think of his name written on some parchment scroll, alongside those of Walpole, Du Maurier, Maturin and Jackson.”—The Guardian (UK)

“Modern classics in this genre are rare, and instant ones even rarer; The Loney, however, looks as though it may be both.”—Sunday Telegraph (UK)

“Enigmatic and distinctly unsettling. . . . The Loney’s power lies in all that Hurley dares to leave out. This is a novel of the unsaid, the implied, the barely grasped or understood, crammed with dark holes and blurry spaces that your imagination feels compelled to fill. It takes both confidence and talent to write like this and it leaves you wanting more of whatever slice of darkness Hurley might choose to dish up next.”—Julie Meyerson, The Observer (UK)

“An extraordinarily haunted and haunting novel, arrestingly in command of its unique spot in the landscape.”—The Telegraph (UK)

“A tale of suspense that sucks you in and pulls you under. As yarns go, it rips.”—New Statesman (UK)

“Nuanced, deliberate and building insensibly from a murmur to a shriek. The Loney is an unforgettable addition to the ranks of the best British horror.”—Metro (UK, five stars)

“An eerie, disturbing read that doesn't let up until its surprise ending.”—Daily Mail (UK)