My Twentieth Century Evening and Other Small Breakthroughs: The Nobel Lecture (Hardcover) 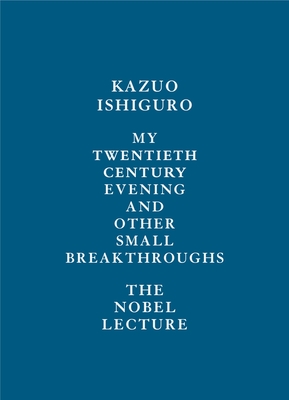 My Twentieth Century Evening and Other Small Breakthroughs: The Nobel Lecture (Hardcover)


On Our Shelves Now
The Nobel Lecture in Literature, delivered by Kazuo Ishiguro (The Remains of the Day and When We Were Orphans) at the Swedish Academy in Stockholm, Sweden, on December 7, 2017, in an elegant, clothbound edition.
In their announcement of the 2017 Nobel Prize in Literature, the Swedish Academy recognized the emotional force of Kazuo Ishiguro’s fiction and his mastery at uncovering our illusory sense of connection with the world. In the eloquent and candid lecture he delivered upon accepting the award, Ishiguro reflects on the way he was shaped by his upbringing, and on the turning points in his career—“small scruffy moments . . . quiet, private sparks of revelation”—that made him the writer he is today.
With the same generous humanity that has graced his novels, Ishiguro here looks beyond himself, to the world that new generations of writers are taking on, and what it will mean—what it will demand of us—to make certain that literature remains not just alive, but essential.
An enduring work on writing and becoming a writer, by one of the most accomplished novelists of our generation.

KAZUO ISHIGURO was born in Nagasaki, Japan, in 1954 and moved to Britain at the age of five. His eight works of fiction have earned him many awards and honors around the world, including the Nobel Prize in Literature and the Booker Prize. His work has been translated into more than fifty languages. The Remains of the Day and Never Let Me Go were made into acclaimed films. Ishiguro also writes screenplays and song lyrics. He lives in London with his wife and daughter.