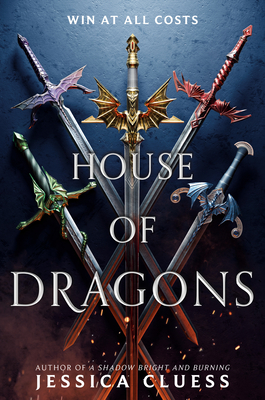 This is book number 1 in the House of Dragons series.

Five teens and their dragons are forced into a high-stakes competition where only one of them is meant to survive. Between the fantastic cast of characters and the perfectly paced plot twists, this is a "stay up until 2am because you have to know what happens next" sort of read. If you're looking for sheer fantasy entertainment, you can't go wrong with this one.

— Kay
Five royal houses will hear the call to compete in the Trial for the dragon throne. A liar, a soldier, a servant, a thief, and a murderer will answer it. Who will win? Three Dark Crowns meets The Breakfast Club with DRAGONS.

When the Emperor dies, the five royal houses of Etrusia attend the Call, where one of their own will be selected to compete for the throne. It is always the oldest child, the one who has been preparing for years to compete in the Trial. But this year is different. This year these five outcasts will answer the call...

THE LIAR: Emilia must hide her dark magic or be put to death.

THE SOLDIER: Lucian is a warrior who has sworn to never lift a sword again.

THE SERVANT: Vespir is a dragon trainer whose skills alone will keep her in the game.

THE THIEF: Ajax knows that nothing is free--he must take what he wants.

THE MURDERER: Hyperia was born to rule and will stop at nothing to take her throne.
JESSICA CLUESS is a graduate of both Northwestern University and the Clarion Writers Workshop. After college, she moved to Los Angeles, where she served coffee to the rich and famous while working on her first novel in the Kingdom on Fire series, A Shadow Bright and Burning. These days, she sits around thinking about dragons far too much, and enjoys it. Visit her at jessicacluess.com and follow her on Twitter at @JessCluess.
An Indie Next Pick

“A wonderful adventure book for teens that challenges ideas of right and wrong, chaos and purity, as well as good and evil.” –School Library Journal

"Readers will be lured in by the dragons and Game of Thrones-style subterfuge, but Cluess's world building and high-stakes conflict will ensure they stick around for the sequel." –BookPage

“A strong sense of social justice and the inevitable inequities in wealth and power drive the story as well, and the triumphant communal efforts of the candidates to subdue the evil priestess running the selection process will have readers cheering for the power of unity.” –Booklist

"Utterly brilliant. House of Dragons is propelled at a breath-stopping pace by a cast of misfits who will steal your heart, break it, mend it, and hand it back again. I adored it with every fiber of my being." –Margaret Rogerson, #1 New York Times bestselling author of An Enchantment of Ravens

“An action-packed fantasy that has it all--a world you want to live in, a lovable cast of characters, and most important, DRAGONS.” –S. Jae-Jones, New York Times bestselling author of Wintersong

"Cluess has created a sweeping start to a series that is sure to enthrall fans everywhere.” –Cailey Neuschaefer, Bookmarks (Winston-Salem, NC)