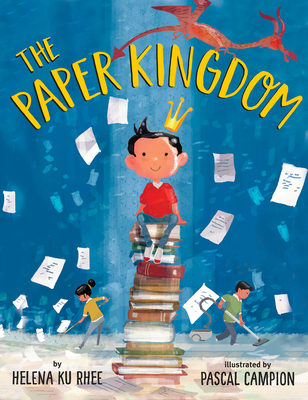 “The Paper Kingdom is a clever and sweet story of a boy who goes to work with his parents at their night-janitor job in a fancy office. He doesn’t understand why his parents have to clean up all the messes, but he enjoys the stories they come up with about those who run the kingdom. Maybe one day he can be king and teach his dragons to pick up after themselves! This book is imaginative and adorable, with an underlying message to be respectful of other people’s time and effort.”
— Andrew King, University Book Store, Seattle, WA

An office at night is reimagined as a fantastical kingdom of paper complete with friendly dragons in this own voices picture book.

When the babysitter is unable to come, Daniel is woken out of bed and joins his parents as they head downtown for their jobs as nighttime office cleaners. But the story is about more than brooms, mops, and vacuums. Mama and Papa turn the deserted office building into a magnificent kingdom filled with paper. Then they weave a fantasy of dragons and kings to further engage their reluctant companion--and even encourage him to one day be the king of a paper kingdom.

The Paper Kingdom expresses the joy and spirit of a loving family who turn a routine and ordinary experience into something much grander. Magical art by Pascal Campion shows both the real world and the fantasy through the eyes of the young narrator.
Helena Ku Rhee grew up in Los Angeles, but has also lived in various parts of the U.S., Asia and Europe. She has a soft spot for small, stout animals and loves to travel far and wide across this beautiful planet, counting among her favorite journeys a camping trip in the Sahara Desert, a swim with elephants in Thailand and a horseback-riding tour of Easter Island. Helena works at a movie studio by day, and dreams up story ideas in her spare time. She currently lives in Los Angeles. Visit her at helenakrhee.com/books or follow her on Twitter at Helenarhee

Pascal Campion is a prolific French-American illustrator and visual development artist whose clients include: DreamWorks Animation, Paramount Pictures, Disney Feature, Disney Toons, Cartoon Network, Hulu, and PBS. Working in the animation industry for over 15 years, he has steadily posted over 3,000 images of personal work to his "Sketches of the Day" project since 2005.

Praise for The Paper Kingdom:

“A beautiful, must-read tribute to hardworking families and the magic they create.” —Kirkus Reviews, starred review

"A layered, loving picture book tribute to family and the sacrifices that parents make for their children's future." —Shelf Awareness, starred review

"A meaningful portrayal of one working-class experience and an image of a loving, hardworking family." —Publishers Weekly

“An affectionate tribute to the bonds of family and the unexpected memories we form when we perform seemingly mundane tasks together.” —BookPage

“An uplifting story of a family working hard to make things better for the next generation.” —School Library Journal