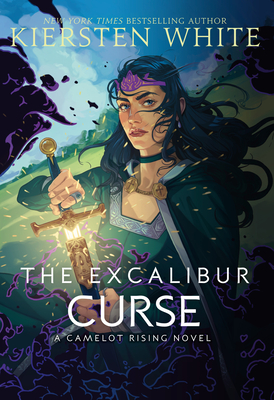 This is book number 3 in the Camelot Rising Trilogy series.

The gripping conclusion to the acclaimed Arthurian fantasy trilogy from New York Times bestselling author Kiersten White finds Guinevere questioning everything—friends and enemies, good and evil, and, most of all, herself.

While journeying north toward the Dark Queen, Guinevere falls into the hands of her enemies. Behind her are Lancelot, trapped on the other side of the magical barrier they created to protect Camelot, and Arthur, who has been led away from his kingdom, chasing after false promises. But the greatest danger isn’t what lies ahead of Guinevere—it’s what’s been buried inside her.

Vowing to unravel the truth of her past with or without Merlin’s help, Guinevere joins forces with the sorceress Morgana and her son, Mordred—and faces the confusing, forbidden feelings she still harbors for him. When Guinevere makes an agonizing discovery about who she is and how she came to be, she finds herself with an impossible choice: fix a terrible crime, or help prevent war.

Guinevere is determined to set things right, whatever the cost. To defeat a rising evil. To remake a kingdom. To undo the mistakes of the past...even if it means destroying herself.

Guinevere has been a changeling, a witch, a queen—but what does it mean to be just a girl?
KIERSTEN WHITE is the New York Times bestselling author of The Guinevere Deception, The Camelot Betrayal, The Dark Descent of Elizabeth Frankenstein, the Slayer series, the And I Darken trilogy, and many more novels. She lives with her family near the ocean in San Diego, which, in spite of its perfection, spurs her to dream of faraway places and even further-away times.

Praise for THE EXCALIBUR CURSE:

"Thought-provoking inspiration behind the lives of the women of Camelot, a must purchase."--SLJ

"Readers will be ensorcelled by the redemptions, revelations, and reconciliations."--Kirkus

Praise for THE CAMELOT BETRAYAL:

“The Camelot Betrayal is a phenomenal read…This story continues to have this powerful subtlety to it that is addicting and evocative, with the added bonus of romance and betrayal.”--The Nerd Daily

“If you’re familiar with the Arthurian legends, you’ll be delighted in the ways White has taken hold of the classic characters and twisted them into her own versions.”--SYFY Wire

Praise for THE GUINEVERE DECEPTION:

"An enjoyable and even thoughtful entry into a mythos that has obsessed us for generations." —NPR

“A fresh take on Camelot . . .  this should be another hit.” —Booklist

“Readers will be dying to fill in the gaps of Guinevere’s memory and to continue the atmospheric adventure in this Arthurian retelling.”  —Bulletin