When My Time Comes: Conversations About Whether Those Who Are Dying Should Have the Right to Determine When Life Should End (Paperback) 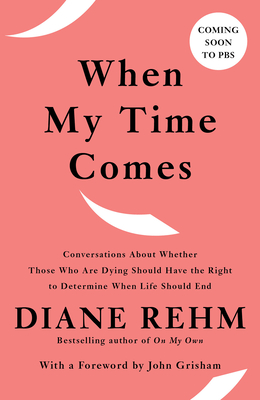 When My Time Comes: Conversations About Whether Those Who Are Dying Should Have the Right to Determine When Life Should End (Paperback)


On Our Shelves Now
The renowned radio host and one of the most trusted voices in the nation candidly and compassionately addresses the hotly contested right-to-die movement, of which she is one of our most inspiring champions. The basis for the acclaimed PBS series.

Through interviews with terminally ill patients and their relatives, as well as physicians, ethicists, religious leaders, and representatives of both those who support and vigorously oppose this urgent movement, Rehm gives voice to a broad range of people personally linked to the realities of medical aid in dying. With characteristic evenhandedness, she provides the full context for this highly divisive issue and presents the fervent arguments—both for and against—that are propelling the current debate: Should we adopt laws allowing those who are dying to put an end to their suffering?

Featuring a deeply personal foreword by John Grisham, When My Time Comes is a response to many misconceptions and misrepresentations of end-of-life care. It is a call to action—and to conscience—and it is an attempt to heal and soothe, reminding us that death, too, is an integral part of life.
Diane Rehm hosted The Diane Rehm Show, distributed by NPR, from 1979 to 2016, when it had a listening audience of nearly three million. She now hosts the podcast On MyMind and The Diane Rehm Book Club for WAMU/NPR. She lives in Washington, D.C. www.dianerehm.org