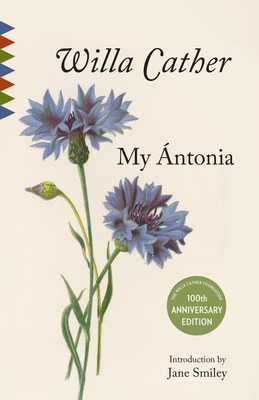 In this symphonically powerful and magnificently observed novel, Cather created one of the most winning heroines in American fiction, a woman whose calm, undemonstrative strength and robust high spirits make her emblematic of the virtues Cather most admired in her country. Ántonia Shimerda is the daughter of Bohemian immigrant parents struggling with the oceanic loneliness of life on the Nebraska prairie. Through the eyes of Jim Burden, her tutor and disappointed admirer, we follow Ántonia from farm to town as she survives hardships both natural and human, from poverty to a failed romance—and not only survives, but triumphs.

WILLA CATHER, author of twelve novels, including O Pioneers!, My Ántonia, and Death Comes for the Archbishop, was born in Virginia in 1873 but grew up in Nebraska, where many of her novels are set. In 1922 she won the Pulitzer Prize for one of her lesser-known books, One of Ours. Her other novels include The Song of the Lark, The Professor’ s House, My Mortal Enemy, and Lucy Gayheart. She died in 1947 in New York City.
“No romantic novel ever written in America, by man or woman, is one half so beautiful as My Ántonia.” –H. L. Mencken

“The time will come when Willa Cather will be ranked above Hemingway.” –Leon Edel