The Adults: A Novel (Paperback) 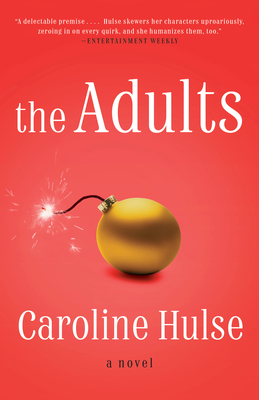 The Adults: A Novel (Paperback)


Availability to be confirmed
“If Love, Actually and National Lampoon’s Christmas Vacation are your two favorite holiday movies, you’re going to love The Adults.”—Bustle

NAMED ONE OF THE BEST BOOKS OF THE YEAR BY REAL SIMPLE • “Sometimes a nasty family comedy is just what you need for the holidays.”—Entertainment Weekly

Claire and Matt are no longer together but decide that it would be best for their daughter, Scarlett, to have a “normal” family Christmas. They can’t agree on whose idea it was to go to the Happy Forest holiday park, or who said they should bring their new partners. But someone did—and it’s too late to pull the plug. Claire brings her new boyfriend, Patrick (never Pat), a seemingly sensible, eligible from a distance Ironman in Waiting. Matt brings the new love of his life, Alex, funny, smart, and extremely patient. Scarlett, who is seven, brings her imaginary friend Posey. He’s a giant rabbit. Together the five (or six?) of them grit their teeth over Forced Fun Activities, drink a little too much after Scarlett’s bedtime, overshare classified secrets about their pasts . . . and before you know it, their holiday is a powder keg that ends where this novel begins—with a tearful, frightened call to the police.

What happened? They said they’d all be adults about this. . . .

Praise for The Adults

“A delectable premise . . . Hulse skewers her characters uproariously, zeroing in on every quirk, and she humanizes them, too.”—Entertainment Weekly

“The ending is worth every page turned in this funny, redeeming wade through the rough tide of blended family.”—San Francisco Chronicle

“Caroline Hulse’s farcical debut is an ode to the big personalities and drama you find in families—unconventional and not.”—Real Simple

“This wry holiday novel will make you chuckle and remind you that nobody’s family is perfect. If you’ve ever sat through an awkward family dinner (who hasn’t?), you’ll relate so hard.”—HelloGiggles

“Razor-sharp comedy.”—Sunday Mirror
Caroline Hulse spends most of her days writing, having fulfilled her dream of having a job she could do in pajamas. She also works in human resources sometimes. She is openly competitive and loves playing board and card games. She can often be found in casino poker rooms. She lives with her husband in Manchester, England.
“Your worst-ever family holiday gathering can’t possibly be as painfully hilarious as the one in Caroline Hulse’s The Adults. I happily devoured this funny, insightful novel and believe you will, as well.”—Julie Schumacher, author of Dear Committee Members and The Shakespeare Requirement

“Such a breath of fresh air! Witty, intensely human, and (dare I say it) relatable . . . This novel is the perfect comedy of errors.”—Katie Khan, author of Hold Back the Stars

“A snappy writing style and changing viewpoints make the pages of this debut fly by as readers will want to know what happens next.”—Library Journal (starred review)

“An entertaining, tongue-in-cheek tale of people who are the adults, after all.”—Booklist