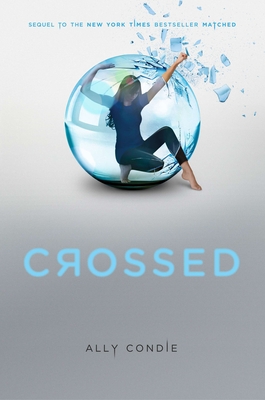 This is book number 2 in the Matched series.

“Readers will not be disappointed by this follow-up to the #1 Indie Next pick Matched, as Cassia follows her forbidden love Ky to the outer edges of the Society, hoping to prevent what seems to be his inevitable death. In alternating chapters from each character's point of view, we are drawn deeper into the mystery of the Society, about which Ky knows much more than he's ever let on. Being banished to the outer provinces is actually a return home for Ky, and his previous experiences may be the best chance he and Cassia have to survive the rough terrain. For that to happen, though, Cassia has to find him, and if she finds him, will her sacrifices be enough to keep them together?”
— Whitney Spotts, Schuler Books & Music, Lansing, MI

The hotly awaited second book in the dystopian Matched trilogy

In search of a future that may not exist and faced with the decision of who to share it with, Cassia journeys to the Outer Provinces in pursuit of Ky - taken by the Society to his certain death - only to find that he has escaped, leaving a series of clues in his wake.

Cassia's quest leads her to question much of what she holds dear, even as she finds glimmers of a different life across the border. But as Cassia nears resolve and certainty about her future with Ky, an invitation for rebellion, an unexpected betrayal, and a surprise visit from Xander - who may hold the key to the uprising and, still, to Cassia's heart - change the game once again. Nothing is as expected on the edge of Society, where crosses and double crosses make the path more twisted than ever.

Ally Condie is the author of the #1 New York Times bestselling Matched trilogy and co-author of the Darkdeep middle grade series. She is also the author of the novel Summerlost, an Edgar Award Finalist. A former English teacher, Ally lives with her family outside of Salt Lake City, Utah. Ally has an MFA from the Vermont College of Fine Arts, and is the founder and director of the nonprofit WriteOut Foundation.

“Cassia and Ky grapple with secrets, wilderness and the tumultuous meanings of love in the second installment of this addictive, layered dystopic trilogy… Although two-boys-one-girl triangles run rife in this genre, Condie’s is complicated and particularly human, involving real emotional scars… Both rich and easy to digest, this will leave fans hungry for the third book.” - Kirkus, starred review

“Told in alternating chapters from their points of view, the book gives readers full access to the hearts and minds of two memorable characters. Their needs, love, and internal conflicts are palpable. Their voices are distinct and authentic, and the writing is often poetic.” - School Library Journal

“This is more than just a placeholder between the first and last parts of a trilogy… Condie effectively sets the stage for the final chapter in Cassia’s story by leaving the reader hanging at the end of the book. Matched fans will devour this book and be eager for the concluding one.” - VOYA