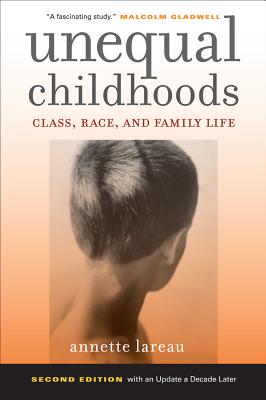 Class does make a difference in the lives and futures of American children. Drawing on in-depth observations of black and white middle-class, working-class, and poor families, Unequal Childhoods explores this fact, offering a picture of childhood today. Here are the frenetic families managing their children's hectic schedules of "leisure" activities; and here are families with plenty of time but little economic security. Lareau shows how middle-class parents, whether black or white, engage in a process of "concerted cultivation" designed to draw out children's talents and skills, while working-class and poor families rely on "the accomplishment of natural growth," in which a child's development unfolds spontaneously—as long as basic comfort, food, and shelter are provided. Each of these approaches to childrearing brings its own benefits and its own drawbacks. In identifying and analyzing differences between the two, Lareau demonstrates the power, and limits, of social class in shaping the lives of America's children.

The first edition of Unequal Childhoods was an instant classic, portraying in riveting detail the unexpected ways in which social class influences parenting in white and African American families. A decade later, Annette Lareau has revisited the same families and interviewed the original subjects to examine the impact of social class in the transition to adulthood.
Annette Lareau is the Stanley I. Sheerr Professor at the University of Pennsylvania. She is faculty member in the Department of Sociology with a secondary appointment in the Graduate School of Education. Lareau is the author of Home Advantage: Social Class and Parental Intervention in Elementary Education (1989; second edition, 2000), and coeditor of Social Class: How Does it Work? (2009); and Education Research on Trial: Policy Reform and the Call for Scientific Rigor (2009); and Journeys through Ethnography: Realistic Accounts of Fieldwork (1996).
“Lareau's work is well known among sociologists, but neglected by the popular media; . . . in books like Unequal Childhoods — Lareau has been able to capture the texture of inequality in America. She's described how radically child-rearing techniques in upper-middle-class homes differ from those in working-class and poor homes, and what this means for the prospects of the kids inside.”
— New York Times

“This accessible ethnographic study offers valuable insights into contemporary family life in poor, working class and middle class American households. . . . A careful and interesting investigation of life in ‘the land of opportunity’ and the ‘land of inequality.’”
— Publishers Weekly

"This is a great book, not only because of its powerful portrayal of class inequalities in the United Stats and its insightful analysis of the processes through which inequality is reproduced, but also because of its frank engagement with methodological and analytic dilemmas usually glossed over in academic texts. It merits a wide readership not only in the United States but also in Europe and would be of interest not only to academics but also to teachers and parents."
— American Journal of Sociology

“Unequal Childhoods captures the social-science imagination just as Betty Friedan's 1963 best seller, The Feminine Mystique, had captured the public imagination in restating the arguments for feminism.”
— Chronicle Of Higher Education

"While other studies allude to these class differences, especially in school contexts, this study takes readers even deeper into the lives of children than most. The result is a richer understanding of how cultural repertoires imparted to children vary by class in ways that entrench class inequality at early ages. . . . All in all, this is a thought-provoking book sure to become a classic for scholars working to understand how inequality is reproduced. In addition, its readability and clear expression of basic sociological ideas about social class, inequality, and family life make it ideal for use in undergraduate classes covering any of these topics."
— Social Forces

"Does social class make a difference in how parents raise children? Annette Lareau answers this question with a resounding "yes" in this absorbing and thought-provoking book."
— Contemporary Sociology

". . . a remarkable contribution . . . Through [Lareau's] work, we are persuaded that social class—and its reproductive potential—is embodied in the very complex, yet ordinary, cultural dimensions of our everyday lives. What now remains is for teachers of sociology to embrace this book, so that future generations of students might be inspired by Lareau's provocative cultural sociology."
— Teaching Sociology

"At both its best and its worst, social-science research tells us what we already know. Annette Lareau’s new book is, however, quite different, and packed with insights into such matters as precisely how middle-class children acquire the habits of success and sense of the entitlement early. . . . as exciting to read as it is depressing in its implication."
— Scotsman

". . . an excellent contribution to the growing literature in the sociology of childhood. Carefully researched and well written, it will make a great addition to courses on social inequality, children and youth, or the family."
— Journal of Marriage and Family

"Lareau began her data collection for Unequal Childhoods in 1989, intensively observing twelve families between 1993 and 1995. The passage of time takes nothing away from this new edition, nor does it mitigate the impact or resonance of its findings. The book’s lasting contribution is Lareau’s conclusion that the childrearing patterns persist over time."
— Canadian Journal of Sociology