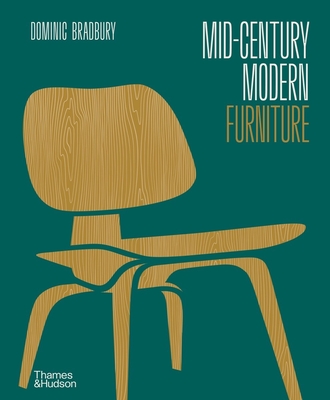 The ultimate collector’s resource, including hundreds of pieces by both well- and lesser-known designers from around the world.

From armchairs and chaises lounges to cabinets and nightstands, the period between the late 1930s and early 1970s was one of the most productive, inventive, and exciting eras for objects and furniture in the home. Following 1945, when postwar optimism combined with new manufacturing methods and material techniques, there was an explosion of design innovation and demand for goods.

The appetite for mid-century modern remains as strong as ever, both for classic designs—many still in production since they were launched—and for rare, hard-to-find pieces from lesser-known designers. While numerous books surveying mid-century modern style have appeared over the years, this volume is specifically for the increasing collector’s market in mid-century modern design, focusing on each piece of furniture as an object of formal invention, manufacturing intelligence, and material innovation.

Overflowing with vibrant color photography, Mid-Century Modern Furniture profiles hundreds of pieces and is a perfect reference in design libraries, studios, andthe homes of private collectors—or as an object of design in its own right. Each item of furniture is presented in detail: illuminated with vibrant illustrations and profiled via in-depth descriptive texts by design writer Dominic Bradbury. The book’s substantial reference section includes essays on materials and a directory of designers. Work by a host of influential talents is profiled throughout, alongside lesser-known pieces by Piet Hein, Bruno Mathsson, Lina Bo Bardi, and Alexander Girard.

Dominic Bradbury is a journalist and writer specializing in architecture and design. He writes for many magazines and newspapers in the UK and internationally, including Wallpaper*, World of Interiors, House & Garden, Vogue Living, The Telegraph, The Times, and the Financial Times. His many books include Mid-Century Modern Complete, The Iconic Interior, Mountain Modern, Waterside Modern,  and most recently, Off the Grid: Houses for Escape.
"A handsome and authoritative compilation of postwar furniture design from the 1940s, 50s, and 60s... A thorough and entertaining record of an important period in design history."
— Interior Design

Like a modern-day Sears & Roebuck wish book for collectors, this hefty coffee-table book features more than 450 big, full-color photographs that capture a comprehensive survey of furniture from the period... Equal parts inspirational and envy-inducing, this book is sure to delight even the most discerning collectors.
— The Atlanta Journal-Constitution

Mid-century modern is hot... An overview of the impactful era with more than 450 colorful illustrations as well as both histories and other little-known facts about both well and lesser-known design icons.
— The Detroit News

While numerous books surveying midcentury modern style have appeared over the years, this volume is specifically for the increasing collector’s market in midcentury modern design, focusing on each piece of furniture as an object of formal invention, manufacturing intelligence, and material innovation.
— Aspire Design and Home

A highly engaging and informative book with vivid pictures that celebrates an era of unforgettable and influential style... Will likely delight both fans of interior design and art history buffs, but it’s also accessible to the casual but curious reader.
— Library Journal (starred review)