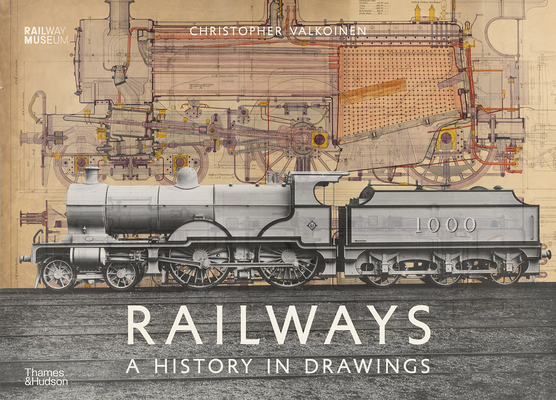 Exquisite drawings of locomotives, carriages, and stations offering unparalleled insight into the history, design and operation of the railway.

At the beginning of the nineteenth century, the first railway was established in Great Britain, contributing to the country’s dramatic social and economic revolution. Detailed plans were created of locomotives, carriages, wagons, stations, bridges, and tunnels to facilitate the manufacturing process and maintenance of the railway network. Miraculously, about one million of these exquisite drawings have survived and are housed at the National Railway Museum, York. In Railways: A History in Drawings, Christopher Valkoinen has selected over 130 examples from the museum’s collection that illustrate the innovative history of Britain’s railway.

Accompanied by lively and insightful commentary, as well as contemporary photographs and posters, featured plans range from Queen Victoria’s royal saloon, Stephenson’s Rocket, and the Flying Scotsman to the boiler for the famous John Bull—the oldest surviving steam locomotive in the United States—and modern experiments with hovertrains. Perfect for train and engineering enthusiasts and anyone interested in British history, this compendium of drawings gives unparalleled insight into all aspects of the design and operation of the British railway system from the early nineteenth century to the 1970s.

Christopher Valkoinen works in the Search Engine library and archives at the National Railway Museum in York, England where he manages the digitization of engineering drawings and other materials. He is also a qualified steam locomotive fireman.