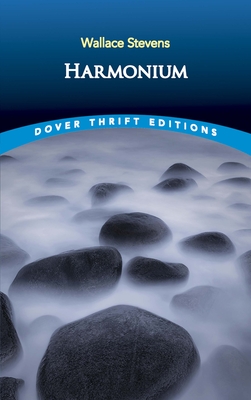 "There are in Harmonium six or eight of the most beautiful poems an American has written. The poems see, feel, and think with equal success." -- Randall Jarrell, Poetry and The Age
An executive with a Connecticut-based insurance company, Wallace Stevens (1879-1955) wrote poetry in the evenings and during his daily commute. Harmonium, his first collection of verse, was published when he was 44 years old. Although largely overlooked upon its 1923 debut, the compilation is recognized today as an important contribution to Modernism, offering a diverse range of satirical and philosophical lyrical works that explore the nature of reality and the power of the imagination. They include some of Stevens's most famous and frequently studied works, including "Thirteen Ways of Looking at a Blackbird," "The Emperor of Ice-Cream," and "Peter Quince at the Clavier.

An executive with a Connecticut-based insurance company, modernist poet Wallace Stevens (1879-1955) published his first poems at the age of 44 and wrote many of his major works when he was well into his 50s. A poet of ideas, he explored the nature of reality and the power of the imagination. In 1955 he received a Pulitzer Prize for his Collected Poems.