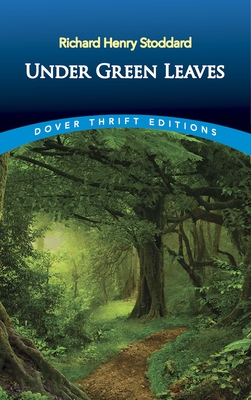 This treasury of verse rejoices in the pleasures of the countryside and the beauty of the outdoors. Originally published in the mid-19th century, Under Green Leaves offers a wealth of poetry inspired by nature, from lyrics by English dramatists such as William Shakespeare, Ben Jonson, and Beaumont and Fletcher, to works by Metaphysical, Romantic, and Victorian poets.
Dozens of enchanting verses include William Blake's Piping Down the Valleys Wild, Ode to a Nightingale by John Keats, Andrew Marvell's The Garden, and Thomas Campbell's To the Evening Star. No compilation of nature poetry would be complete without contributions from William Wordsworth, whose Lines Written in Early Spring and To a Skylark appear here. Other featured poets include John Milton, Alfred Tennyson, Robert Herrick, George Herbert, Mary Howitt, and many other writers whose meditations on flowers, birds, woodlands, and summer evenings remain ever green.

Poet and literary critic Richard Henry Stoddard (1825-1903) reviewed literature for the New York World and was an editor for Vanity Fair, The Aldine, and other periodicals. He worked as an inspector of customs at the Port of New York as well as George B. McClellan's confidential clerk and as city librarian of New York. His poem Roses and Thorns was set to music by Tchaikovsky.