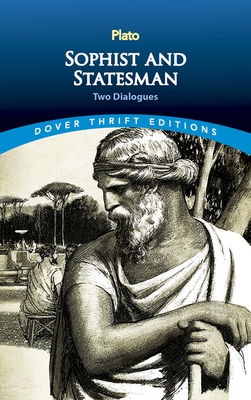 
Special Order - Usually Arrives in 1-5 Days
- This book cannot be returned
These two dialogues by the greatest of the ancient Greek philosophers explore a vital concern of a democratic society: how to define the special abilities and qualities that make a genuine statesman. They further examine the distinction between an authentic statesman and the sophist, an individual who pretends to be a statesman but lacks the essential knowledge, personal qualities, and philosophical outlook.
Written after Parmenides -- in which the philosopher condemned his own theory of separate, immaterial forms -- Sophist and Statesman are of special interest in terms of their reflection of Plato's conceptions of method and metaphysics. In addition, Statesman provides a transitional view of the author's political philosophy in the period between the Republic and the Laws. Together, the dialogues illuminate Plato's growing preoccupation with practical knowledge, offering a more informal and pragmatic approach than his earlier works. This edition features the acclaimed translations by Benjamin Jowett.
Plato (427-347 BC) ranks as the most important figure in the development of the Western philosophical tradition. His inexhaustible dialogues cover a wide range of philosophical questions and issues and are as enduringly alive and meaningful as they were 2,400 years ago.