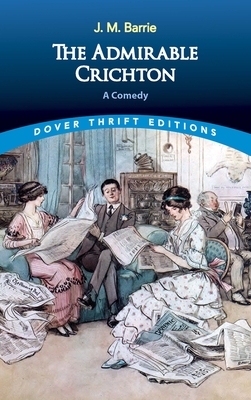 
Availability to be confirmed
- This book cannot be returned
Once a month, Lord Loam encourages his servants to enter the drawing room for tea. This ritual defiance of tradition disturbs Crichton, the butler, who regards the class system as the natural outcome of a civilized society. When the entire household is shipwrecked and stranded on a desert island, a new social order emerges ― with comic results for master and servant.
This classic English comedy, written by the author of Peter Pan, combines light entertainment with serious undertones concerning the class structure of British society during the early twentieth century. First produced in 1902, the play was adapted for radio and television and has been frequently revived on the stage.
Scottish author, playwright, and novelist Sir James Matthew Barrie (1860-1937) is best remembered as the creator of Peter Pan. Although he wrote several other books and plays that were extremely popular in their day, Barrie's lasting fame rests upon the stories inspired by a family of boys he befriended during an outing in London's Kensington Gardens.