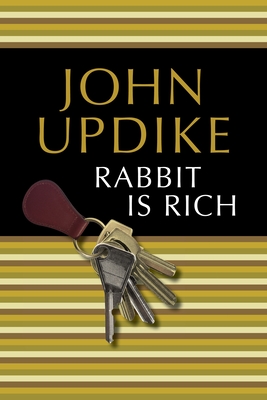 This is book number 3 in the Rabbit series.

The hero of John Updike’s Rabbit, Run, ten years after the events of Rabbit Redux, has come to enjoy considerable prosperity as the chief sales representative of Springer Motors, a Toyota agency in Brewer, Pennsylvania. The time is 1979: Skylab is falling, gas lines are lengthening, and double-digit inflation coincides with a deflation of national self-confidence. Nevertheless, Harry “Rabbit” Angstrom feels in good shape, ready to enjoy life at last—until his wayward son, Nelson, returns from the West, and the image of an old love pays a visit to the lot. New characters and old populate these scenes from Rabbit’s middle age as he continues to pursue, in his zigzagging fashion, the rainbow of happiness.

John Updike was born in Shillington, Pennsylvania, in 1932. He graduated from Harvard College in 1954 and spent a year in Oxford, England, at the Ruskin School of Drawing and Fine Art. From 1955 to 1957 he was a member of the staff of The New Yorker. His novels have won the Pulitzer Prize, the National Book Award, the National Book Critics Circle Award, the Rosenthal Foundation Award, and the William Dean Howells Medal. In 2007 he received the Gold Medal for Fiction from the American Academy of Arts and Letters. John Updike died in January 2009.

“Dazzlingly reaffirms Updike’s place as master chronicler of the spiritual maladies and very earthly pleasures of the Middle-American male.”—Vogue

“Rich, funny . . . Updike at the very height of his powers.”—New York magazine