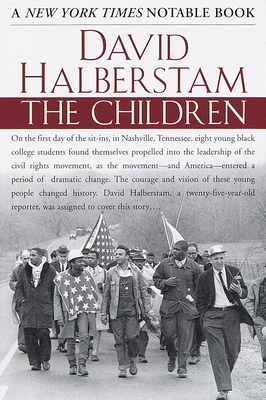 
On Our Shelves Now
A remarkable true story of heroism, courage, and faith
DAVID HALBERSTAM graduated from Harvard, where he had served as managing editor of the daily Harvard Crimson.  It was 1955, a year after the Supreme Court outlawed segregation in public schools.  Halberstam went south and began his career as the one reporter on the West Point, Mississippi, Daily Times Leader.  He was fired after ten months there and went to work for The Nashville Tennessean.  When the sit-ins broke out in Nashville in February 1960, he was assigned to the story as principal reporter.  He joined The New York Times later that year, winning the Pulitzer Prize in 1964 for his early reports from Vietnam.  He has received every other major journalistic award, and is a member of the Society of American  Historians.  His previous nine books have all been bestsellers.

David Halberstam has been called "this generation's equivalent of Theodore White and John Gunther" by The Boston Globe.  Of David Halberstam's books, the critics have said about  The Best and the Brightest, "a rich, entertaining and profound reading experience" (The New York Times); about The Powers That Be, "moves with all the speed and grace of a fine novel" (Chicago Tribune); about The Reckoning, "Halberstam manages to write business history with an investigator's skill and a novelist's flair" (The Washington Post); about The Fifties, "sinfully entertaining" (Newsweek); about The Breaks of the Game, "the best book [he] has written" (The Washington Post); about The Amateurs, "one of the best books ever written about a sport" (Newsweek); about Summer of '49, "dazzling...a celebration of a heroic age" (The New York Times); about October 1964, "masterful...memorable" (The Washington Post).
"POWERFUL . . . TOLD WITH SUCH PASSIONATE CONVICTION THAT THE READER IS TRANSFIXED."
--The New York Times

"David Halberstam is America's Alexis de Tocqueville. . . . In The Children, he returns to his roots as a young reporter for the Nashville Tennessean, where he covered the start of the civil rights movement, the sit-ins that galvanized a generation. In following a dozen student idealists through the arc of their lives in the early 1960s to the present ambiguous moment at the end of the century, he shows how people make history and how the making of that history affects their lives. The Children is an important book, especially for today's youth, who will read in its moving and revealing pages the remarkable stories of flesh-and-blood people who were the fiber of a social movement."
--Los Angeles Times Book Review

"UNFORGETTABLE DRAMA . . . In Mr. Halberstam's hands, the early days of the civil-rights movement come to life as never before in print. . . . The Children has a rare power."
--The Wall Street Journal

"THE CHILDREN IS UTTERLY ABSORBING and contains some of the most moving passages Halberstam has ever written. . . . The civil-rights movement already has produced superb works of history, books such as David J. Garrow's Bearing the Cross and Taylor Branch's recently published Pillar of Fire. . . . David Halberstam adds another with The Children."
--The Philadelphia Inquirer

"STIRRING . . . Within this book live stories of timeless heroism. . . . Stories so fraught with hatred and hope, violence and suffering, fear and courage, that one reads the book gripping it with both hands, almost afraid to turn the page."
--The Washington Post Book World