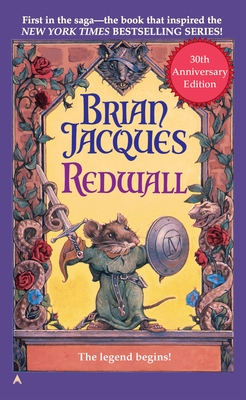 This is book number 1 in the Redwall series.

The book that inspired a legend—the first novel in the bestselling saga of Redwall.

Welcome to Mossflower Wood, where the gentle mice have gathered to celebrate a year of peace and abundance. All is well…until a sinister shadow falls across the ancient stone abbey of Redwall. It is rumored that Cluny is coming—Cluny, the terrible one-eyed rat and his savage horde—Cluny, who has vowed to conquer Redwall Abbey! The only hope for the besieged mice lies in the lost sword of the legendary Martin the Warrior. And so begins the epic quest of a bumbling young apprentice—a courageous mouse who would rise up, fight back…and become a legend himself.

Brian Jacques was both a master storyteller and a jack-of-all-trades. He lived the life of a sailor, actor, stand-up comedian, radio host, bobby, even a bus driver. He was the recipient of an honorary doctorate in literature from the University of Liverpool and a New York Times bestselling author of more than twenty-five books for younger readers, including the wildly popular Redwall series. Dr. Jacques was a lifelong resident of Liverpool, England.

Praise for Redwall and the Novels of Brian Jacques

“Jacques extols the virtues of honor and valor…[The Redwall Novels] are a good read, with enticing maps, plenty of songs, a dose of natural history, and loads of excitement, charm, and humor.”—The Irish Times

“Children are privileged to enter the rich world of Redwall and Mossflower. So are the parents who get to come along.”—The Boston Phoenix

“A grand adventure story. Once the reader is hooked, there is no peace until the final page.”—Chicago Sun-Times

“The Redwall books...add a touch of chivalry and adventure reminiscent of the King Arthur stories.” —Arkansas Democrat-Gazette

“Jacques’s effortless, fast-paced narrative gets its readers quickly hooked. He clearly loves this other world he has created—there’s a genius sense of involvement and care (lots of lovingly descriptive passages), as well as an overflowing, driving imagination.”—Birmingham Post

“A richly imagined world in which bloody battles vie for attention with copious feasting and tender romancing.”—The Cincinnati Enquirer