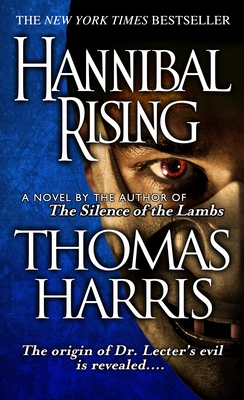 This is book number 4 in the Hannibal Lecter Series series.

He is one of the most haunting characters in all of literature. At last the evolution of his evil is revealed.

Hannibal Lecter emerges from the nightmare of the Eastern Front, a boy in the snow, mute, with a chain around his neck.

He seems utterly alone, but he has brought his demons with him.

Hannibal’s uncle, a noted painter, finds him in a Soviet orphanage and brings him to France, where Hannibal will live with his uncle and his uncle’s beautiful and exotic wife, Lady Murasaki.

Lady Murasaki helps Hannibal to heal. With her help he flourishes, becoming the youngest person ever admitted to medical school in France.

But Hannibal’s demons visit him and torment him. When he is old enough, he visits them in turn.

He discovers he has gifts beyond the academic, and in that epiphany, Hannibal Lecter becomes death’s prodigy.
Thomas Harris began his writing career covering crime in the United States and Mexico, and was a reporter and editor for the Associated Press in New York City. His first novel, Black Sunday, was published in 1975, followed by Red Dragon in 1981, The Silence of the Lambs in 1988, and Hannibal in 1999.
“There are images of morbid beauty here.... Harris' handling of the wartime violence is also impressive, as swift and vicious as the blitzkrieg itself.”—Los Angeles Times
“Gripping detail.... [Harris] moves the story along at an impressively fast clip.”—Boston Globe