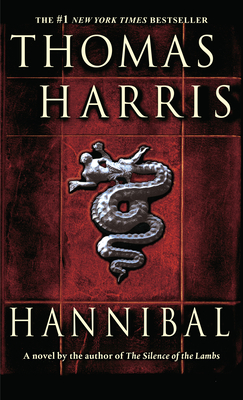 This is book number 3 in the Hannibal Lecter Series series.

#1 NEW YORK TIMES BESTSELLER • “Is it as good as Red Dragon and Silence of the Lambs? No . . . this one is better.”—Stephen King, The New York Times Book Review

You remember Hannibal Lecter: gentleman, genius, cannibal. Seven years have passed since Dr. Lecter escaped from custody. And for seven years he’s been at large, free to savor the scents, the essences, of an unguarded world.

But intruders have entered Dr. Lecter’s world, piercing his new identity, sensing the evil that surrounds him. For the multimillionaire Hannibal left maimed, for a corrupt Italian policeman, and for FBI agent Clarice Starling, who once stood before Lecter and who has never been the same, the final hunt for Hannibal Lecter has begun. All of them, in their separate ways, want to find Dr. Lecter. And all three will get their wish. But only one will live long enough to savor the reward. . . .

“Interested in getting the hell scared out of you? Buy this book on a Friday . . . lock all doors and windows. And by Monday , you might just be able to sleep without a night-light.”—Newsday

“Strap yourself in for one heck of a ride. . . . It’ll scare your socks off.”—Denver Post

“A stunner . . . writing in language as bright and precise as a surgeon’s scalpel, Harris has created a world as mysterious as Hannibal’s memory palace and as disturbing as a Goya painting. This is one book you don’t want to read alone at night.”—The Atlanta Journal-Constitution

“Relentless . . . endlessly terrifying . . . 486 fast-paced pages, in which every respite is but a prelude to further furious action . . . Hannibal begins with a murderous paroxysm that leaves the reader breathless. . . . Hannibal speaks to the imagination, to the feelings, to the passions, to exalted senses and to debased ones. Harris’s voice will be heard for a while.”—Los Angeles Times

“Enormously satisfying . . . a smashing good time, turning the pages for thrills, chills, horror and finally, a bracing, deliciously wicked slap in the face . . . perhaps the very best the thriller/horror genre is capable of producing.”—San Diego Union-Tribune
Thomas Harris began his writing career covering crime in the United States and Mexico, and was a reporter and editor for the Associated Press in New York City. His first novel, Black Sunday, was published in 1975, followed by Red Dragon in 1981, The Silence of the Lambs in 1988, and Hannibal in 1999.
“[A] devilish tale . . . eerily realistic and chillingly vivid from beginning to end. As Harris sketches his hideous scenarios, he allows us to color them in with our imaginations. But not overdoing it, he draws us in,practically making us conspirators in his macabre fantasy.”—New York Post

“The readers who have been waiting for Hannibal only want to know if it is as good as Red Dragon and The Silence of the Lambs. . . . It is a pleasure to reply in the negative. No, not as good. This one is better. It is, in fact, one of the two most frightening popular novels of our time, the other being The Exorcist. . . . Hannibal is really not a sequel at all, but rather the third and most satisfying part of one very long and scary ride through the haunted palace of abnormal psychiatry. . . . Hannibal is a full-out unabashed horror novel. . . . I hope with all my heart that [Harris] will write again,and sooner rather than later—novels that bravely and cleverly erase the line between popular fiction and literature are very much to be prized.”—Stephen King, The New York Times Book Review

“A truly scary book . . . Harris writes with authority and a knack for detail, creating some memorably creepy scenes.”—People

“A triumph of straightforward, smart prose. Not a word is wasted, not a thought is irrelevant. Harris is a master, and in Hannibal he reached, he stretched, and once again, he grabbed the prize.”—Dayton Daily News

“The book takes off . . . into the stratosphere of fantasy, into Hannibal Lecter’s private world. . . . a Grand Guignol romp . . . Yet there’s still a basso ostinato of serious questions, and the answers are darker than in Silence.”—The Nation

“Diabolically clever . . . Harris serves up a feast in Hannibal. . . . He writes like an angel with the devil’s sense of humor. . . . The hypnotic blend of horror story and psychological thriller lifts crime fiction to sublime. . . . Hannibal is ghoulishly good fare.”—Boston Herald

“A page-turner . . . Harris works some surprising twists . . . [he] paces the action well.”—Houston Chronicle