I'm Supposed to Protect You from All This: A Memoir (Paperback) 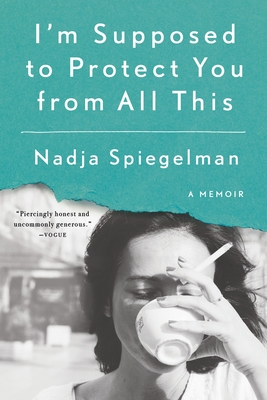 A Vogue Best Book of the Year

"What Ferrante did for female friends—exploring the tumult and complexity their relationships could hold—Spiegelman sets out to do for mothers and daughters. She’s essentially written My Brilliant Mom." —Slate

A memoir of mothers and daughters—and mothers as daughters—traced through four generations, from Paris to New York and back again.

For a long time, Nadja Spiegelman believed her mother was a fairy. More than her famous father, Maus creator Art Spiegelman, and even more than most mothers, hers—French-born New Yorker art director Françoise Mouly—exerted a force over reality that was both dazzling and daunting. As Nadja’s body changed and “began to whisper to the adults around me in a language I did not understand,” their relationship grew tense. Unwittingly, they were replaying a drama from her mother’s past, a drama Nadja sensed but had never been told. Then, after college, her mother suddenly opened up to her. Françoise recounted her turbulent adolescence caught between a volatile mother and a playboy father, one of the first plastic surgeons in France. The weight of the difficult stories she told her daughter shifted the balance between them.
It had taken an ocean to allow Françoise the distance to become her own person. At about the same age, Nadja made the journey in reverse, moving to Paris determined to get to know the woman her mother had fled.  Her grandmother’s memories contradicted her mother’s at nearly every turn, but beneath them lay a difficult history of her own. Nadja emerged with a deeper understanding of how each generation reshapes the past in order to forge ahead, their narratives both weapon and defense, eternally in conflict. Every reader will recognize herself and her family in I'm Supposed to Protect You From All This, a gorgeous and heartbreaking memoir that helps us to see why sometimes those who love us best hurt us most.

Nadja Spiegelman is the author of the memoir I'm Supposed to Protect You From All This. The daughter of Maus author Art Spiegelman and New Yorker art director Francoise Mouly, she grew up in New York City, and now divides her time between Paris and Brooklyn.

"A classic tale of coming to terms with your parents flaws and making your own space to re-imagine your relationship…The writing is compelling and the complicated relationship between mother and daughter is definitely worth potential late library fines.” –BookRiot

“Arresting…[Spiegelman] investigates the complicated, contested mythologies of her maternal family…[she] is insightful about the malleability and power of memory…eloquent…[and] sharp.” —NPR

"What Ferrante did for female friends—exploring the tumult and complexity their relationships could hold—Spiegelman sets out to do for mothers and daughters. She’s essentially written My Brilliant Mom." —Slate

“If the sins of the fathers are visited upon the sons, so are the sins of the mothers, grandmothers and great-grandmothers visited upon the daughters. In this first book by Art Spiegelman’s daughter, those sins are cause for a fierce exhumation of the author’s maternal lineage…The greatest success of this poetic, searing memoir lies in its universality. What mother has not hated her child in at least one terrible moment; what daughter has not, for at least one terrible moment, wished her mother dead? … beautiful [and]…compelling.” —San Francisco Chronicle

“In her sensitive, probing memoir [Spiegelman]… excavates the lives that lead to hers, to understand what came before, to understand herself… Spiegelman approaches her subjects with sensitivity, wisdom, generosity, and honesty, with an acute sense of the responsibilities and risks involved with sharing other people’s stories… more than anything, [she] shows us, in intimate detail, what a strange thing it is, to have a mother, how painful, how powerful.” – Boston Globe

"Vivid reflections of a common humanity and a tractable memory.” –Dallas News

“A brilliant examination of the mother-daughter dynamic, the things we desire from one another, what we can—and cannot—give, and how we find ourselves.” —Refinery29, The Best Books of 2016

“Spiegelman takes on the onerous task of picking at the narrative threads of her mother’s adolescence and unravelling it to find the truth. The result is this memoir, which is a beautiful thing. A word to the wise: your inclination will be to read this as fast as possible, but take your time. The language and the story both deserve your patience.” —The Frisky

“Spiegelman’s brilliant excavation into four generations of her maternal line is nothing short of astonishing…A meditation on memory and the nature of truth as much as a family history, I’m Supposed to Protect You from All This introduces a stunning new voice in the field of memoir.” –Bookpage, an August Nonfiction Top Pick

“[Spiegelman] writes candidly and beautifully about the complex relationship between mothers and daughters.” –PureWow

“If we see the modern memoir as a route towards the self, its measure might be taken by the nature of the trip: is the driver speeding or taking you on a languorous country jaunt?...Life is short, and I sometimes feel long memoirs should be criminalised – but then you get an author as open and thoughtful as Nadja Spiegelman, and you only wish the drive were even more circuitous; the scenery is wonderful, and the observations wry." -The Saturday Paper

“Stunning and artistic…[a] touching, surprising consideration of the unclear inheritances of family, and the certain fallibility of memory... [Spiegelman] writes page-turning true stories of women, their work and love, which read like novels, and gains the rare sort of understanding that precludes the need for forgiveness.” –Booklist, Starred Review

"A fascinating, gracefully written glimpse into the complexities of family life." -Kirkus Reviews

"Nadja Spiegelman’s memoir works like a series of Russian nesting dolls: in every mother, she finds a woman who was once a daughter. Her prose is luminous and precise; her portraits intricately tender but charged by the wild electricity of familial love. I felt myself moved and expanded as I read this thoughtful, probing book—and I called my own mother the moment I was done." –Leslie Jamison, author of The Empathy Exams

“'I have always known what it means to be a character in someone else’s story,' writes Nadja Spiegelman, whose birth was 'marked by an asterisk' in her father’s immortal Maus. I'm Supposed to Protect You From All This unpacks that asterisk into an astonishing memoir, a dense branching forest where the lives of daughters, mothers, and grandmothers intersect, tangle, and separate in a way I have never seen before. Spiegelman's narrative complicates, blurs, and questions the line between the self and the other—that basic fault-line of all autobiographical writing—as perhaps only a story about mothers can.” –Elif Batuman, author of The Possessed

"This stunning memoir of mothers and daughters blew me away with its beauty and honesty. At once unflinching in its exploration of maternal cruelty and unabashed about the wonders of a mother's love, it manages to capture the complexity of that bond like nothing else I've ever read. An extraordinary achievement." –J. Courtney Sullivan, author of The Engagements

"In this mesmerizing book, Nadja Spiegelman sets out to understand the women in her family—her French mother, grandmother, and great-grandmother, who expected little from men, wouldn’t dare ask intimate questions of their elders, and were more preoccupied with war than introspection. Spiegelman’s prose is witty, tender, assured and poetic, and her investigation progresses like memory itself, a realm in which nothing quite hangs together but everything makes sense. The unexpected symmetries between the generations, as well as the inevitable insults and pains, make this artful memoir feel like the story of every family."–Sheila Heti, author of How Should a Person Be?

“Nadja Spiegelman has written a passionate, penetrating, swiftly paced memoir about her mother, her grandmother, and herself.  In sharp contrast to many writers working in the genre, who naively assume they are in possession of the definitive, true version of their stories, Spiegelman nimbly interrogates the workings of memory itself—its shifting shape and unreliability, its fictional character. I am proud to play a bit part in this complex love story about three generations of women and what each of them remembers.” –Siri Hustvedt, author of The Blazing World

“Spiegelman's sagely poetic 'memoir' is maybe best described as the biography of a mother seen through the eyes of a daughter. Spiegelman explores what it is to become a woman born of strong women, how firm and porous are the boundaries between the generations, how enduring and mutable is the invincibility (and the vulnerability) a woman passes down to her daughter. Spiegelman's  intimate portrait of female identity and idolatry is intelligent, forthright and heartbreaking. Her sentences will haunt me forever."– Heidi Julavits, author of The Folded Clock