The Chupacabra Ate the Candelabra (Hardcover) 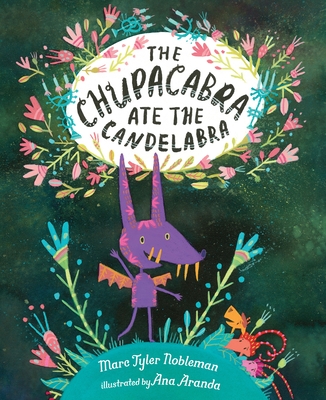 The Chupacabra Ate the Candelabra (Hardcover)


On Our Shelves Now
With its hilarious dialogue, trio of bumbling goats, and fantastically zany villain, this unique, laugh-out-loud story based on a legendary monster is sure to crack up kids and grown-ups alike.

Like most goats, Jayna, Bumsie, and Pep’s greatest fear is being eaten for dinner by the legendary chupacabra—it’s common knowledge that goats are a chupacabra’s favorite food! One night, tired of living in fear, the impetuous goats whip out their trusty candelabra and head off to find the beast and scare it away before it can find them. Little do they know that candelabras are the chupacabra’s third-favorite food . . . and he isn’t about to stop there. This chupacabra has quite the appetite, and the goats are in for a big surprise!
Marc Tyler Nobleman (noblemania.blogspot.com) writes books for all ages, including Boys of Steel: The Creators of Superman and Bill the Boy Wonder: The Secret Co-Creator of Batman, which made best-of-the-year lists at USA Today, the Washington Post, and MTV, inspired an NPR All Things Considered segment, and led to a TED talk. He’s formerly a lead writer for Nickelodeon Magazine, and his cartoons have appeared in over 100 publications, including the Wall Street Journal, Harvard Business Review, Publishers Weekly, and Forbes. He lives in Bethesda, Maryland.

Ana Aranda (anaranda.com) was born and raised in Mexico City, and completed her undergraduate studies in illustration in France. She now lives in San Francisco, where she has painted murals in the Mission District, for the Consulate General of Mexico, and for the prestigious de Young Museum. Her biggest inspirations are her childhood memories, the vibrant colors of Mexico, and music.
“A playful twist on outsmarting a predator. . . . The goats, all of whom have distinct personalities, deal with being kept on their toes by the chupacabra. As the title suggests, there is a lot of playful language throughout. . . . Aranda’s illustrations, which extend the text, elevate this title and burst with humor. Her bright pinks, yellows, and purples vibrate off the page in the often nighttime setting. The snaggle-toothed but adorable chupacabra sometimes lurks in the background, while other times his shadow comically dominates the page. . . . This enjoyable monster book is a first purchase for most libraries. Perfect for storytime read-alouds or anytime a humorously spooky tale is in order.”—School Library Journal

“Nobleman introduces a comic trio. . . . References to Latin American food and culture appear throughout, and debut illustrator Aranda’s vibrant mixed-media artwork amplifies the book’s cross-cultural brand of humor; her chupacabra, with its beady nose, spiky purple ears, and lovely flowered hide, wouldn’t threaten a cat (although it throws a scary shadow). Readers will be sorry when this one is over.”—Publishers Weekly

“Vibrant folk-style illustrations in watercolor, ink, and gouache depict the expressive goats and the sometimes looming—but never very scary—chupacabra. . . . Incorporates plenty of lively touches, from the goats’ humorous wordplay to some playfully formatted text. . . . An amusing take on the legendary beast.”—Booklist