The Great Secret: The Classified World War II Disaster that Launched the War on Cancer (Paperback) 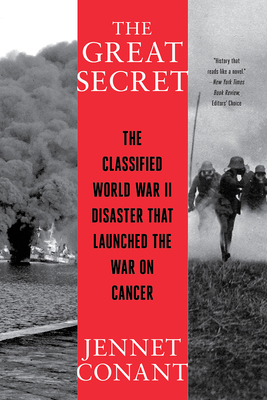 The Great Secret: The Classified World War II Disaster that Launched the War on Cancer (Paperback)

The gripping story of a chemical weapons catastrophe, the cover-up, and how one American Army doctor’s discovery led to the development of the first drug to combat cancer, known today as chemotherapy.

On the night of December 2, 1943, the Luftwaffe bombed a critical Allied port in Bari, Italy, sinking seventeen ships and killing over a thousand servicemen and hundreds of civilians. Caught in the surprise air raid was the John Harvey, an American Liberty ship carrying a top-secret cargo of 2,000 mustard bombs to be used in retaliation if the Germans resorted to gas warfare.

When one young sailor after another began suddenly dying of mysterious symptoms, Lieutenant Colonel Stewart Alexander, a doctor and chemical weapons expert, was dispatched to investigate. He quickly diagnosed mustard gas exposure, but was overruled by British officials determined to cover up the presence of poison gas in the devastating naval disaster, which the press dubbed "little Pearl Harbor." Prime Minister Winston Churchill and General Dwight D. Eisenhower acted in concert to suppress the truth, insisting the censorship was necessitated by military security.

Alexander defied British port officials and heroically persevered in his investigation. His final report on the Bari casualties was immediately classified, but not before his breakthrough observations about the toxic effects of mustard on white blood cells caught the attention of Colonel Cornelius P. Rhoads—a pioneering physician and research scientist as brilliant as he was arrogant and self-destructive—who recognized that the poison was both a killer and a cure, and ushered in a new era of cancer research led by the Sloan Kettering Institute. Meanwhile, the Bari incident remained cloaked in military secrecy, resulting in lost records, misinformation, and considerable confusion about how a deadly chemical weapon came to be tamed for medical use.

Deeply researched and beautifully written, The Great Secret is the remarkable story of how horrific tragedy gave birth to medical triumph.

Jennet Conant is the New York Times best-selling author of several books, including Tuxedo Park, 109 East Palace, The Irregulars, and the critically acclaimed Man of the Hour. She lives in Sag Harbor, New York, with her husband, son, and two golden retrievers.
In a history that reads like a novel, Conant connects the 1943 bombing by the Nazis of an American ship containing banned mustard gas to the development of chemotherapy as a cancer treatment.
— An Editors’ Choice of the New York Times Book Review

Engrossing.… Convey[s] a fast-paced medical detective story that demonstrates how careful scientific observation can yield unexpected benefits and serves as a reminder of the difficult choices made by governments to balance public health and secrecy in matters of security.
— Peter Reczek - Science

With a keen understanding of medical science, cancer, and the history of World War II, as well as an amazing range of sources, Conant dramatically illuminates a dark moment in history that eventually led to the medical breakthrough of chemotherapy.
— National Book Review

Few writers are better at finding new paths through the well-worn territory of World War II than historian Jennet Conant.... Conant delights in the devilish details, the hidden, overlooked, and deeply personal stories that constitute our collective historical record. In her deft and experienced hands, readers will discover great delight as well.
— Jessica Lahey - Air Mail

The Great Secret is a ripping good yarn, jam-packed with marvelous prose, wonderful historical characters, and superb research on a little-known but critical chapter in the history of medicine and the Second World War. I could not put this book down until I reached the final page.

— Howard Markel, MD, PhD, director of the Center for the History of Medicine, University of Michigan

With a scintillating detective-tale plot rendered with an accomplished novelist’s flair, Jennet Conant peels back the layers of deception employed by Allied authorities—including Winston Churchill—to conceal the fact that many of those who died at the Bari disaster in December 1943 perished from unprecedented exposure to mustard gas and immersion in ship fuel oil. This fast-paced narrative alone would make The Great Secret a landmark work, but Conant surpasses this with the even more astonishing chronicle of how insights into the Bari deaths ultimately galvanized the creation of the whole field of cancer chemotherapy. This is a heartbreaking and inspiring tale of tragedy leading to triumph.

In her masterly The Great Secret, Jennet Conant has given us at once a crucial World War II story and a medical mystery as unsettling as it is gripping. As Conant’s hero (that’s not too strong a word), a US Army medical officer named Stewart Alexander, starts to unlock the secret that has caused scores of unnecessary deaths, he comes to understand the immense consequences of these now all-but-forgotten events, and sets in motion studies that&mdsah;as Ms. Conant explains with wonderfully lucid and vigorous authority—have shaped the medical landscape we inhabit today.

— Richard Snow, author of A Measureless Peril: America in the Fight for the Atlantic, the Longest Battle of World War II

Jennet Conant has uncovered a humdinger of a tale, one that is equal parts war story, conspiracy thriller and medical mystery. More than anything, The Great Secret shows how the dogged efforts of a handful of scientists were able to turn a wartime tragedy and coverup into one of society’s greatest gifts. This is a rare jewel of a story that readers will love and fellow historians will covet.

Jennet Conant unravels the remarkable story of a World War II chemical weapons disaster which inspired one of the twentieth century’s greatest breakthroughs in medicine with verve and precision. The Great Secret reads like a wartime adventure and political thriller combined.

— Wendy Moore, author of No Man’s Land: The Trailblazing Women Who Ran Britain’s Most Extraordinary Military Hospital During World War I