CRACK99: The Takedown of a $100 Million Chinese Software Pirate (Hardcover) 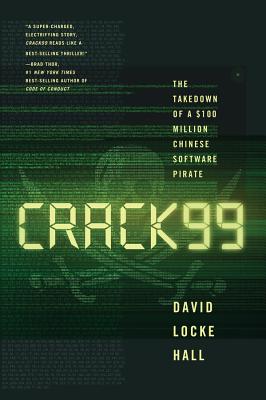 CRACK99: The Takedown of a $100 Million Chinese Software Pirate (Hardcover)

The utterly gripping story of the most outrageous case of cyber piracy prosecuted by the U.S. Department of Justice.

A former U.S. Navy intelligence officer, David Locke Hall was a federal prosecutor when a bizarre-sounding website, CRACK99, came to his attention. It looked like Craigslist on acid, but what it sold was anything but amateurish: thousands of high-tech software products used largely by the military, and for mere pennies on the dollar. Want to purchase satellite tracking software? No problem. Aerospace and aviation simulations? No problem. Communications systems designs? No problem. Software for Marine One, the presidential helicopter? No problem. With delivery times and customer service to rival the world’s most successful e-tailers, anybody, anywhere—including rogue regimes, terrorists, and countries forbidden from doing business with the United States—had access to these goods for any purpose whatsoever.

But who was behind CRACK99, and where were they? The Justice Department discouraged potentially costly, risky cases like this, preferring the low-hanging fruit that scored points from politicians and the public. But Hall and his colleagues were determined to find the culprit. They bought CRACK99's products for delivery in the United States, buying more and more to appeal to the budding entrepreneur in the man they identified as Xiang Li. After winning his confidence, they lured him to Saipan—a U.S. commonwealth territory where Hall’s own father had stormed the beaches with the marines during World War II. There they set up an audacious sting that culminated in Xiang Li's capture and imprisonment. The value of the goods offered by CRACK99? A cool $100 million.

An eye-opening look at cybercrime and its chilling consequences for national security, CRACK99 reads like a caper that resonates with every amazing detail.

David Locke Hall was a federal prosecutor for twenty-three years. He served as an intelligence officer in the U.S. Navy Reserve for thirty years, retiring at the rank of captain. He lives near Philadelphia, where he works in private practice.
A crackling good tale, well-told in Hall’s confiding, thoughtful, and humorous tone.
— Eloise Kinney - Booklist

A quirky tale of international pursuit through a legal labyrinth with unsettling implications regarding proliferation of ominous technologies.
— Kirkus Reviews

A super-charged, electrifying story. CRACK99 reads like a bestselling thriller!

A rollicking true tale of high-level undercover cyber espionage in which Hall puts every bit of his extensive experience and investigative skills into catching a cyber-pirate. His stories of teaming with Homeland Security agents to double-cross a Chinese cyber criminal are, in a word, sensational.
— Retired FBI Special Agent Robert K. Wittman, author of Priceless: How I Went Undercover to Rescue the World’s Stolen Treasures