The Big Red Book of Modern Chinese Literature: Writings from the Mainland in the Long Twentieth Century (Hardcover) 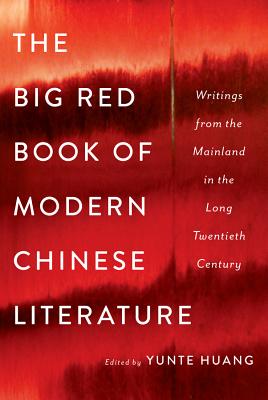 By Yunte Huang (Editor)
$39.95
Availability to be confirmed

A panoramic vision of the Chinese literary landscape across the twentieth century.

Award-winning literary scholar and poet Yunte Huang here gathers together an intimate and authoritative selection of significant works, in outstanding translations, from nearly fifty Chinese writers, that together express a search for the soul of modern China. From the 1912 overthrow of a millennia-long monarchy to the Cultural Revolution, to China’s rise as a global military and economic superpower, the Chinese literary imagination has encompassed an astonishing array of moods and styles—from sublime lyricism to witty surrealism, poignant documentary to the ironic, the transgressive, and the defiant.

Huang provides the requisite context for these revelatory works of fiction, poetry, essays, letters, and speeches in helpful headnotes, chronologies, and brief introductions to the Republican, Revolutionary, and Post-Mao Eras. From Lu Xun’s Call to Arms (1923) to Gao Xinjiang’s Nobel Prize–winning Soul Mountain (1990), this remarkable anthology features writers both known and unknown in its celebration of the versatility of writing. From belles lettres to literary propaganda, from poetic revolution to pulp fiction, The Big Red Book of Modern Chinese Literature is an eye-opening, mesmerizing, and indispensable portrait of China in the tumultuous twentieth century.

Yunte Huang is a Guggenheim Fellow and a professor of English at the University of California, Santa Barbara. He is the author of Transpacific Imaginations and Charlie Chan, which won the 2011 Edgar Award and was a finalist for the 2010 National Book Critics Circle Award in Biography. Having come of age in China as a student in the time of Tiananmen, Huang now lives in Santa Barbara, California.

[A] superb and suitably massive compendium of Chinese literature that stretches from the downfall of the Qing dynasty in 1912 to the present….A treasure trove for any reader interested in Chinese literature.
— Publisher's Weekly (starred review)

A brilliant and unique compilation. From Yu Dafu’s touching tale of finding friendship (1923) to Bei Dao’s account of what it was like to grow up in an apartment containing only three lightbulbs (2010), you will be enchanted by this collection. The Big Red Book changes the way we read our own literature.

This is the first anthology to give adequate attention to the diverse, challenging literary currents of the past three decades, when writers built on and expanded the literary creativity of the first half of the twentieth century. With the help of this volume, we see the dry spell of the Mao period as merely an enforced interlude in a century of creative ferment.
— Andrew J. Nathan, Class of 1919 Professor of Political Science, Columbia University

These writings belong to no single canon, obey no single aesthetic or ideological code, advance no one agenda. They are simply the equipment that helped three generations of Chinese men and women find their way through the dangerous twentieth century, and to read through it is to join them on their journey.
— Haun Saussy, University Professor of Comparative Literature, University of Chicago

Exceptional. Yunte Huang, scholar, poet, and translator, brings his literary erudition, poetic sensibility, and personal background to bear on his selections from a rich diversity of genres. For the general reader, this ‘big’ book is heavy but reads ‘light’ because it is lucidly presented with smooth translations and succinct introductions. . . . It provides a subtle but ironic counterpoint to the ideological weight of Mao’s Little Red Book.