Fault Lines: A History of the United States Since 1974 (Hardcover) 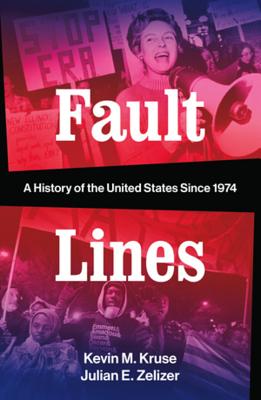 Two award-winning historians explore the origins of a divided America.

If you were asked when America became polarized, your answer would likely depend on your age: you might say during Barack Obama’s presidency, or with the post-9/11 war on terror, or the culture wars of the 1980s and 1990s, or the “Reagan Revolution” and the the rise of the New Right.

For leading historians Kevin M. Kruse and Julian E. Zelizer, it all starts in 1974. In that one year, the nation was rocked by one major event after another: The Watergate crisis and the departure of President Richard Nixon, the first and only U.S. President to resign; the winding down of the Vietnam War and rising doubts about America’s military might; the fallout from the OPEC oil embargo that paralyzed America with the greatest energy crisis in its history; and the desegregation busing riots in South Boston that showed a horrified nation that our efforts to end institutional racism were failing.

In the years that followed, the story of our own lifetimes would be written. Longstanding historical fault lines over income inequality, racial division, and a revolution in gender roles and sexual norms would deepen and fuel a polarized political landscape. In Fault Lines, Kruse and Zelizer reveal how the divisions of the present day began almost five decades ago, and how they were widened thanks to profound changes in our political system as well as a fracturing media landscape that was repeatedly transformed with the rise of cable TV, the internet, and social media.

How did the United States become so divided? Fault Lines offers a richly told, wide-angle history view toward an answer.

Kevin M. Kruse is an award-winning scholar on twentieth-century American political history. Fault Lines grew out of the hugely popular course that he and Julian Zelizer co-created at Princeton University, The United States Since 1974.

Julian E. Zelizer is an award-winning scholar on twentieth-century American political history. Fault Lines grew out of the hugely popular course that he and Kevin Kruse co-created at Princeton University, The United States Since 1974.

[With] deep detail and taut-as-a-thriller pacing…the authors detail how the Democratic and—especially—Republican parties moved the country from post-New Deal liberalism to an increasingly hard-right philosophy, culminating with Trump…If Fault Lines doesn’t provide easy answers to our current dilemma, its cleareyed, pin-sharp overview is a necessary map of how we got here.

Kruse and Zelizer do an admirable job of creating a narrative out of the chaotic events of the recent past.
— L. Benjamin Rolsky - Los Angeles Review of Books

Kevin M. Kruse and Julian E. Zelizer’s Fault Lines is a brilliant primer for understanding the troubling precedents for today’s mass American political dysfunction. Both historians are deeply informed and surefooted thinkers. A must-read foundational work for our time!

Comprehensive, fair-minded—half an American lifetime between two covers and in one fast-paced telling!
— David Frum, senior editor at The Atlantic and author of Trumpocracy

Fault Lines is a brilliantly written and urgently needed account of the last half century of American history, decades during which, as Kruse and Zelizer argue, Americans abandoned a search for common ground in favor of a political culture of endless, vicious, and—very often—mindless division. A gripping and troubling account of the origins of our turbulent, desperate times.

— Jill Lepore, author of These Truths

Fault Lines is a stunning work of the history of our present. An antidote to fake news and historical propaganda. In the Age of Trump, Kruse and Zelizer’s book sets the record straight. Every major cultural and political division over the past four decades comes to life in these pages, and in the telling we are confronted with the country we have been and the country we might become.

— Khalil Gibran Muhammad, professor of history, race, and public policy at Harvard Kennedy School and author of The Condemnation of Blackness

Fault Lines is a must-read. Kruse and Zelizer have taken the fragmented histories of a polarized, divided nation, and masterfully woven those threads into a tapestry that allows us to see not only what divides but what unites and that the choice is ours.

— Carol Anderson, Charles Howard Candler Professor of African American Studies at Emory University and author of White Rage and One Person, No Vote

A forcefully argued analysis of the rifts that divide us and a lively, wide-ranging chronicle of the nation’s odyssey from Nixon to Trump.
— Bruce J. Schulman, William E. Huntington Professor of History at Boston University and author of The Seventies

[Fault Lines] showcases innovative approaches to the major—mostly domestic—events of the recent American past, while providing ample historical grounding for comprehending the nation’s current state of division and despair…Kruse and Zelizer write their eminently readable book in a single, clear voice—no easy task for joint authors.

In their energetic, informative history, Princeton University professors Kruse and Zelizer chronicle the post-Watergate era through the lens of growing divisions on immigration, race, the economy and add sexuality and class inequality to the mix…this history briskly moves through the Clarence Thomas Supreme Court confirmation process, Iran-Contra, Clinton impeachment, Bush v. Gore, Iraq War and the Affordable Care Act, and tensions that have been ratcheted up and exploited by the internet boom and ultra-partisan media that accompanied it.
— National Book Review