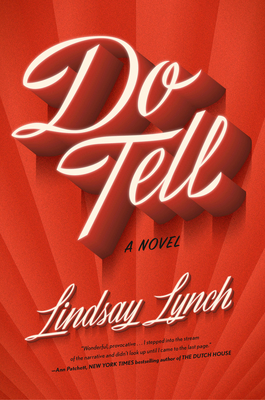 
Coming Soon - Available for Pre-Order Now
“There is little more alluring than the promise of secrets, and Do Tell is full of them–glamorous, tawdry, and human. Lindsay Lynch has created a rich portrait of the lives of early Hollywood's beautiful puppets and those holding their strings.” –Emma Straub, New York Times bestselling author of This Time Tomorrow

As character actress Edie O'Dare finishes the final year of her contract with FWM Studios, the clock is ticking for her to find a new gig after an undistinguished stint in the pictures. She's long supplemented her income moonlighting for Hollywood's reigning gossip columnist, providing her with the salacious details of every party and premiere. When an up-and-coming starlet hands her a letter alleging an assault from an A-list actor at a party with Edie and the rest of the industry’s biggest names in attendance, Edie helps get the story into print and sets off a chain of events that will alter the trajectories of everyone involved.

Now on a new side of the entertainment business, Edie’s second act career grants her more control on the page than she ever commanded in front of the camera. But Edie quickly learns that publishing the secrets of those former colleagues she considers friends has repercussions. And when she finds herself in the middle of the trial of the decade, Edie is forced to make an impossible choice with the potential to ruin more than one life.

Debut novelist Lindsay Lynch brings the golden age of Hollywood to glittering life, from star-studded opening nights to backlot brawls, on-location Westerns to the Hollywood Canteen. Through Edie's wry observations, Lynch maps the intricate networks of power that manufacture the magic of the movies, and interrogates who actually gets to tell women's stories.
LINDSAY LYNCH is a writer from Washington, DC. A longtime indie bookseller, she currently lives in Nashville, TN, where she works as a book buyer for Parnassus Books. Her work has appeared in The Adroit Journal, The Rumpus, Electric Lit, The Atlantic, The Offing and Lit Hub, among other places. She has been a participant in the Tin House Summer Work­shop and the Napa Valley Writers’ Conference. She holds an MFA in Fiction from the University of Wyoming. Do Tell is her debut novel.
“A wonderful, provocative novel about the way time changes how we see the world. Edie O'Dare is a failed Hollywood actress who reinvents herself as a gossip columnist in order to keep a roof over her head, only to discover that this is the job she's good at. Like our intrepid narrator, Do Tell manages to be both funny and substantive, breezy and wise. I stepped into the stream of the narrative and didn't look up until I came to the last page.”
--Ann Patchett, New York Times bestselling author of The Dutch House

"Gossip columnist Edie O’Dare has enemies and sources, but no friends in a Golden Age Hollywood whose gleam is tarnished by exploitation, cruelty and betrayal. Like a latter-day Cecil B. DeMille, Lindsay Lynch deftly directs her large cast of morally complex characters to illuminate issues of fame and notoriety as relevant now as they were almost a century ago."
--Geraldine Brooks, New York Times bestselling author of Horse

"There is little more alluring than the promise of secrets, and Do Tell is full of them--glamorous, tawdry, and human. Lindsay Lynch has created a rich portrait of the lives of early Hollywood's beautiful puppets and those holding their strings."
--Emma Straub, New York Times bestselling author of This Time Tomorrow

“In Do Tell Lindsay Lynch takes a glance back at golden-age Hollywood and captures the fizzy magic, the secret lives, and the deep, destructive misogyny within the industry’s DNA. This is a wry, entertaining, and incisive debut.”
--Lily King, New York Times bestselling author of Writers & Lovers

“This dazzling novel is a riveting exposé of the dream factory which will surprise readers at every turn. You won't be able to put it down.”
--Adriana Trigiani, New York Times bestselling author of The Good Left Undone

“Do Tell is an absolute marvel: page-turning yet thought-provoking, historical in its setting yet contemporary in its concerns. With a keen eye for period detail, Lindsay Lynch explores how the power of secrets were the secret to power in Hollywood’s Golden Age. The result is a deeply moving, immensely satisfying, blockbuster of a debut novel."
--Anthony Marra, New York Times bestselling author of Mercury Pictures Presents

"Lindsay Lynch has written a novel so thoroughly immersive, I looked up from its pages disoriented -- confused not to find myself amid the couture gowns and hushed secrets of old Hollywood. I'll tell every reader I know: I adored Do Tell."
-- Mary Laura Philpott, bestselling author of Bomb Shelter: Love, Time, and Other Explosives

"Do Tell is a glittering, riot of a debut filled with tantalizing gossip, lavish parties and an insider’s glimpse into a bygone era of Hollywood glamour. Lindsay Lynch brings the studio system to life with these unforgettable yet deeply complicated characters whose lives are caught at the crossroads of power and truth telling. This is a novel you won’t want to miss."
--Kali Fajardo-Anstine, bestselling author of Woman of Light and Sabrina & Corina

"An electric novel about power and complicity in the Golden Age of Hollywood told through the eyes of Edith O’Dare, a narrator as fearsome as she is fallible. In Do Tell, Lindsay Lynch masterfully uncovers a world in which gossip is currency and image is everything, laying bare the devastating consequences of secrets told and untold. Enthralling and utterly relevant."
--Jenny Tinghui Zhang, international bestselling author of Four Treasures of the Sky