The Warlow Experiment: A Novel (Hardcover) 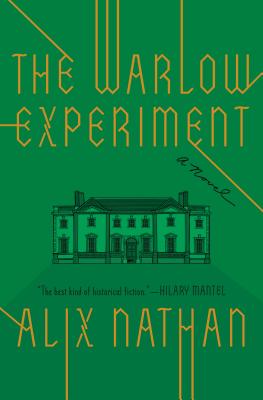 By Alix Nathan
$26.95
Availability to be confirmed

Think you’re the ultimate introvert? This guy pays a man to be locked in his basement for 7 years to prove people don’t really need other people. It does not go well. Set in an English manor house in 1793, the novel explores the themes of freedom and who deserves it — themes very relevant today.

Named one of the best books of 2019 by the Daily Mail, The Sunday Times (London), and the BBC

An utterly transporting and original historical novel about an eighteenth-century experiment in personal isolation that yields unexpected--and deeply, shatteringly human--results.

"The best kind of historical fiction. Alix Nathan is an original, with a virtuoso touch."
--Hilary Mantel

Herbert Powyss lives in an estate in the Welsh Marches, with enough time and income to pursue a gentleman's fashionable investigations and experiments in botany. But he longs to make his mark in the field of science--something consequential enough to present to the Royal Society in London. He hits on a radical experiment in isolation: For seven years a subject will inhabit three rooms in the basement of the manor house, fitted out with rugs, books, paintings, and even a chamber organ. Meals will arrive thrice daily via a dumbwaiter. The solitude will be totally unrelieved by any social contact whatsoever; the subject will keep a diary of his daily thoughts and actions. The pay: fifty pounds per annum, for life.
Only one man is desperate to apply for the job: John Warlow, a semi-literate laborer with a wife and six children to provide for. The experiment, a classic Enlightenment exercise gone more than a little mad, will have unforeseen consequences for all included.

ALIX NATHAN read English and Music at York University. She lives in the Welsh Marches, where she owns some ancient woodlands with her husband. She is the author of His Last Fire (2014), a story collection, and The Flight of Sarah Battle (2015), a novel.

“In a novel premised on stagnation, the incremental but inevitable deterioration of both major characters becomes an unexpectedly gripping drama, fueled by the attraction of repulsion. . .[A] unique and chilling novel.”
—The New York Times Book Review

"Social dominance, and the violent means used to maintain it, unites the various storylines in The Warlow Experiment. . .Ms. Nathan stages a series of moral awakenings and comeuppances that overturn the expected order of things. . .Warlow’s plight itself is indelible, both pungent and horrifying in its details and profound as a metaphor—a symbol of upper-class barbarity stashed away in the cellar like a telltale heart beating beneath the floorboards."
—The Wall Street Journal

“This unusual historical novel will reward readers with the ripe inquiry it makes of a peculiar subject.”
—The Washington Post

"Sardonic comedy takes on deeper resonances in a tale, rich in period detail, of a ruinously backfiring experiment."
—The Sunday Times, London

"[Nathan has a] delicacy of touch. . .Shocking and convincing. . .The complications that ensue, rooted in the initial wrongness of the experiment, take us into the deep heart of blunted male emotion. . .[An] impressive novel."
—The Times Literary Supplement

"Original and beautifully written, this is a meaty and gripping novel of obsession gone sour."
—Daily Mail, London

“I read Alix Nathan’s beautifully constructed new novel about an experiment most strange at great speed: its sentences, imagery and import call you onward and ever deeper. More than once since I finished I’ve looked down and wondered what might be going on just a few feet below or above me. The Warlow Experiment gets into your head.”
—Laird Hunt, author of The Kind One and In the House in the Dark of the Woods

“This is an extraordinary, quite brilliant book.”
—C. J. Sansom, author of Tombland

"A powerful and unsettling novel, both fascinating and infinitely strange.”
—Andrew Taylor, author of The King’s Evil

“An allegory of prison culture at its cruelest. . .[The Warlow Experiment] is a powerful rebuke to the notion that withholding compassion can somehow be corrective. Nathan’s main strength is her keen characterizations of all involved. . .A sturdy historical novel about the perils of pseudoscience.”
—Kirkus Reviews