Riddle of the Ice: A Scientific Adventure into the Arctic (Paperback) 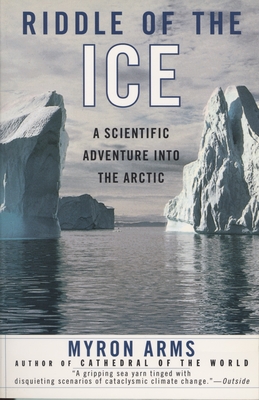 Riddle of the Ice: A Scientific Adventure into the Arctic (Paperback)


Availability to be confirmed
By any account, the impenetrable barrier of sea ice that blocked the Brendan's Isle halfway up the Labrador Coast should not have been there in late July, in what was one of the hottest summers in memory a few hundred miles to the south. Frustrated and mystified at having to turn back so early in his 1991 northbound voyage, sailor Myron Arms became determined to explain the anomaly.

Three years later, having pursued this obsession from the Woods Hole Oceanographic Institution to Columbia's Lamont-Doherty Earth Observatory to NASA's Goddard Space Flight Center, Arms took his fifty-foot sailboat and a small crew back up the coast to test his ideas--this time making it past the Arctic Circle.

The days and nights at sea are an experience of both untold vastness and the closest of quarters, of calm seas one hour and pounding gales the next. And by the time the Brendan's Isle rides the great swells of Baffin Bay, north of everything but towering icebergs, the reader can be in no doubt that, together with the crew, he is holding a finger to the very pulse of our planet.

Weaving together the unfolding narrative of the voyage itself with a groundbreaking synthesis of the latest theories about Arctic ice production--and the troubling signals it may now be sending us--Riddle of the Ice is a taut and suspenseful science mystery told as captain's log. This is narrative nonfiction of the highest calibre, and it is certain to become a classic in the genre.
Myron Arms is a teacher, writer, and professional sailor who contributes regularly to Cruising World, Sail, and many other sailing and adventure magazines. Educated at both Yale and the Harvard Divinity School, he taught high school English for seven years before founding a sailing program for teenagers. As a U.S. Coast Guard–licensed ocean master since 1977, he has voyaged more than 100,000 sea miles and has led seven sail-training expeditions to northern Canada, Greenland, and the Arctic. He lives with his wife, Kay, on a farm overlooking the Sassafras River on Maryland’s Eastern Shore.
"This crucial book describes a voyage in every sense of the word--a wonderfully told account of a passage to some of the world's loneliest waters, as well as a remarkably lucid tale of a journey into the most vital science now in progress anywhere on earth."--Bill McKibben, author of The End of Nature

"Offers not only a provocative introduction to the emerging field of 'earth systems science,' but also a gripping sea yarn tinged with disquieting scenarios of cataclysmic climate change."--Outside