Sun and Moon Have a Tea Party (Hardcover) 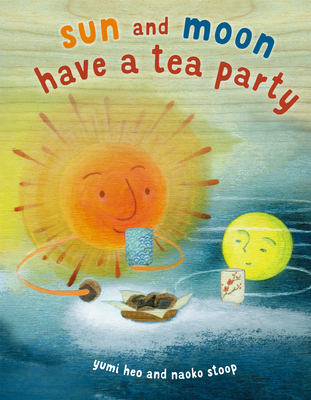 Sun and Moon Have a Tea Party (Hardcover)

The sun is sure children spend their entire days at school, while the moon is sure kids spend all their time sleeping. When the sun and the moon stay up past their bedtime, they see things as they really are. A fun read-aloud.

— Rae Ann
In this perfect bedtime read, the sun and moon argue with each other about what happens during the day and night.

Sun and Moon sit down for a tea party, but they soon find out that they see the world very differently. Moon says moms and dads get their kids ready for bed, while Sun says no, they get their children ready for school. So who's right? Well, as the two come to find out, they both are. With the help of Cloud, a gentle mediator, each stays up past their bedtime and sees the world from the other's incredible point of view.

Perfect for sleepy listeners, here is a charming young picture book that will also help children see the world from different perspectives.
YUMI HEO, who passed away in 2016, was the author and illustrator of many acclaimed books for children. She illustrated Knopf's The Lonely Lioness and the Ostrich Chicks by Verna Aardema, as well as Henry's First-Moon Birthday and Uncle Peter's Amazing Chinese Wedding, both written by Lenore Look, and both selected as ALA-ALSC Notable Children's Books. She is also the author and illustrator of Ten Days and Nine Nights and the illustrator of Polka Dot Penguin Pottery, both published by Schwartz & Wade Books.

NAOKO STOOP is the self-taught illustrator of the New York Times Best Illustrated Book The Red Knit Cap Girl, the sequels Red Knit Cap Girl to the Rescue and Red Knit Cap Girl and the Reading Tree, and several other books for children. She also illustrated the picture book Pup and Bear, written by Kate Banks, which received three starred reviews. Visit her on the web at naokosstoop.blogspot.com or on Twitter @naokosstoop.
Praise for Sun and Moon Have a Tea Party:

“Lovely depictions of nature and people. . . . A clever look at how the Sun and Moon have different perspectives on what humans do on Earth.” —School Library Journal

“[The] colors drift and fade, giving a dreamy feeling to a celestial debate played out on the streets of a bustling, diverse community. Heo’s tale has the weight and force of a fable.” —Publishers Weekly

“A thoughtful, gentle introduction to the limits of one’s own perspective.” —Kirkus Reviews

“Stoop’s art, mixed media on plywood, draws on the underlying grain for a distant, windswept tone but occasionally punctuates it with small saturated pops, as in the lively morning glories. The result is a softly friendly world both in both day and night, with day’s inviting crowds giving way to night’s luminous beauty.” —The Bulletin

“This gentle tale can serve as a bedtime story or a picture book introductory STEM lesson for young students.” —Shelf Awareness

“Adults and children alike will want to return to this title about caretaking for reassurances of love in the present and promise for the future." —The Bulletin, starred review

“The lyrical writing makes this a wonderful read-aloud. This story of extraordinary kindness may also prompt a discussion of diverse families.” —School Library Journal, starred review

“The subdued visual mood is a lovely match for Banks’s unadorned prose, and the characters’ relationship to the harsh landscape underscores their resilience.” —Publishers Weekly, starred review