Niagara Falls All Over Again: A Novel (Paperback) 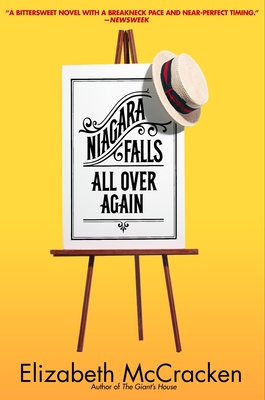 Niagara Falls All Over Again: A Novel (Paperback)


Availability to be confirmed
By turns graceful and knowing, funny and moving, Niagara Falls All Over Again is the latest masterwork by National Book Award finalist and author of The Giant’s House, Elizabeth McCracken.

Spanning the waning years of vaudeville and the golden age of Hollywood, Niagara Falls All Over Again chronicles a flawed, passionate friendship over thirty years, weaving a powerful story of family and love, grief and loss. In it, McCracken introduces her most singular and affecting hero: Mose Sharp—son, brother, husband, father, friend ... and straight man to the fat guy in baggy pants who utterly transforms his life.

To the paying public, Mose Sharp was the arch, colorless half of the comedy team Carter and Sharp. To his partner, he was charmed and charming, a confirmed bachelor who never failed at love and romance. To his father and sisters, Mose was a prodigal son. And in his own heart and soul, he would always be a boy who once had a chance to save a girl’s life—a girl who would be his first, and greatest, loss.

Born into a Jewish family in small-town Iowa, the only boy among six sisters, Mose Sharp couldn’t leave home soon enough. By sixteen Mose had already joined the vaudeville circuit. But he knew one thing from the start: “I needed a partner,” he recalls. “I had always needed a partner.”

Then, an ebullient, self-destructive comedian named Rocky Carter came crashing into his life—and a thirty-year partnership was born. But as the comedy team of Carter and Sharp thrived from the vaudeville backwaters to Broadway to Hollywood, a funny thing happened amid the laughter: It was Mose who had all the best lines offstage.

Rocky would go through money, women, and wives in his restless search for love; Mose would settle down to a family life marked by fragile joy and wrenching tragedy. And soon, cracks were appearing in their complex relationship ... until one unforgivable act leads to another and a partnership begins to unravel.

In a novel as daring as it is compassionate, Elizabeth McCracken introduces an indelibly drawn cast of characters—from Mose’s Iowa family to the vagabond friends, lovers, and competitors who share his dizzying journey—as she deftly explores the fragile structures that underlie love affairs and friendships, partnerships and families.

An elegiac and uniquely American novel, Niagara Falls All Over Again is storytelling at its finest—and powerful proof that Elizabeth McCracken is one of the most dynamic and wholly original voices of her generation.
Elizabeth McCracken is the recipient of the Harold Vursell Award from the American Academy of Arts and Letters and the PEN/Winship Award. She has received grants from the Guggenheim Foundation, and Michener foundation, the Fine Arts Center in Provincetown, and the National Endowment for the Arts. She was also honored as one of Granta’s 20 Best Writers Under 40.
“Any doubts that McCracken could not equal the inventiveness, wit and quirky imagination of her first novel, The Giant's House, will be dispelled by this relentlessly eventful, rollickingly funny and heartwarming narrative. In its delicate balance of black humor, irony and pathos, this novel is as exhilarating as the waters of Niagara, its flow mimicking the tumultuous rush of time.”—Publishers Weekly