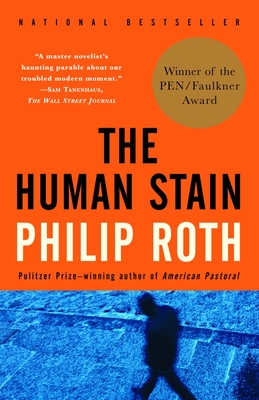 
On Our Shelves Now
NATIONAL BESTSELLER • WINNER OF THE PEN/FAULKNER AWARD • The Pulitzer Prize–winning author of American Pastoral delivers “a master novelist's haunting parable about our troubled modern moment" (The Wall Street Journal).

It is 1998, the year in which America is whipped into a frenzy of prurience by the impeachment of a president, and in a small New England town, an aging classics professor, Coleman Silk, is forced to retire when his colleagues decree that he is a racist. The charge is a lie, but the real truth about Silk would have astonished even his most virulent accuser.

Coleman Silk has a secret, one which has been kept for fifty years from his wife, his four children, his colleagues, and his friends, including the writer Nathan Zuckerman. It is Zuckerman who stumbles upon Silk's secret and sets out to reconstruct the unknown biography of this eminent, upright man, esteemed as an educator for nearly all his life, and to understand how this ingeniously contrived life came unraveled. And to understand also how Silk's astonishing private history is, in the words of The Wall Street Journal, "magnificently" interwoven with "the larger public history of modern America."
PHILIP ROTH won the Pulitzer Prize for American Pastoral. In 1998 he received the National Medal of Arts at the White House and in 2002 the highest award of the American Academy of Arts and Letters, the Gold Medal in Fiction. He twice won the National Book Award and the National Book Critics Circle Award. He won the PEN/Faulkner Award three times. In 2005 The Plot Against America received the Society of American Historians’ Prize for “the outstanding historical novel on an American theme for 2003–2004.” Roth received PEN’s two most prestigious awards: in 2006 the PEN/Nabokov Award and in 2007 the PEN/Bellow Award for achievement in American fiction. In 2011 he received the National Humanities Medal at the White House, and was later named the fourth recipient of the Man Booker International Prize. He died in 2018.
"In American literature today, there's Philip Roth, and then there's everybody else." —Chicago Tribune

“By turns unnerving, hilarious, and sad…. It is a book that shows how the public zeitgeist can shape, even destroy, an individual’s life…. Not only a philosophic bookend to American Pastoral but a large and stirring book as well.” —Michiko Kakutani, The New York Times

"Philip Roth's The Human Stain is the best novel he has written—not to devalue the past. Here, everything the writer has learnt and experienced within that indefinable form we call the novel, the impact of society on himself and the people around him, world contemporary mores, beliefs, prejudices, have come to full realization." —Nadine Gordimer, The Times Literary Supplement (International Book of the Year Selection)