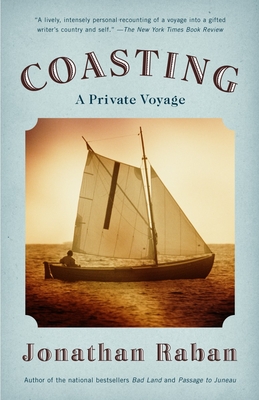 Put Jonathan Raban on a boat and the results will be fascinating, and never more so than when he’s sailing around the serpentine, 2,000-mile coast of his native England. In this acutely perceived and beautifully written book, the bestselling author of Bad Land turns that voyage–which coincided with the Falklands war of 1982-into an occasion for meditations on his country, his childhood, and the elusive notion of home.

Whether he’s chatting with bored tax exiles on the Isle of Man, wrestling down a mainsail during a titanic gale, or crashing a Scottish house party where the kilted guests turn out to be Americans, Raban is alert to the slightest nuance of meaning. One can read Coasting for his precise naturalistic descriptions or his mordant comments on the new England, where the principal industry seems to be the marketing of Englishness. But one always reads it with pleasure.

Jonathan Raban is the author of Soft City, Arabia, Foreign Land, Old Glory, For Love and Money, Hunting Mister Heartbreak, Bad Land, and Passage to Juneau; he has also edited The Oxford Book of the Sea. Raban has received the National Book Critics Circle Award (for Bad Land), the Heinemann Award for Literature, the Thomas Cook Award, the Pacific Northwest Booksellers Award, the Governor’s Award of the State of Washington, and the PEN West Creative Nonfiction Award, among others. Raban lives in Seattle, with his daughter.

“A lively, intensely personal recounting of a voyage into a gifted writer's country and self.” —The New York Times Book Review

“Coasting is a glorious book, written with energy, wit and a melancholy lyricism . . . There's something wonderful on every page of this book.” —The Seattle Times Post-Intelligencer

“Marvelously written and superbly constructed. . . . The sort of book you put among those favorite books you keep on your desk or table . . . the sort you wish you had written yourself.” — Beryl Bainbridge, The Spectator