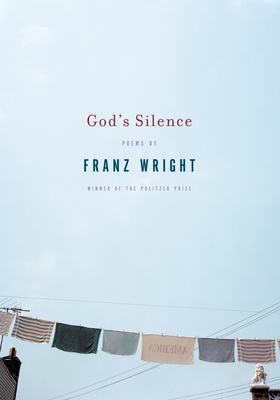 
Special Order - Usually Arrives in 1-5 Days
In this luminous new collection of poems, Franz Wright expands on the spiritual joy he found in his Pulitzer Prize-winning Walking to Martha’s Vineyard. Wright, whom we know as a poet of exquisite miniatures, opens God’s Silence with “East Boston, 1996,” a powerful long poem that looks back at the darker moments in the formation of his sensibility. He shares his private rules for bus riding (“No eye contact: the eyes of the terrified / terrify”), and recalls, among other experiences, his first encounter with a shotgun, as an eight-year-old boy (“In a clearing in the cornstalks . . . it was suggested / that I fire / on that muttering family of crows”). Throughout this volume, Wright continues his penetrating study of his own and our collective soul. He reaches a new level of acceptance as he intones the paradox “I have heard God’s silence like the sun,” and marvels at our presumptions:We speak of Heaven who have not yet accomplishedeven this, the holiness of things precisely as they are, and never will!Though Wright often seeks forgiveness in these poems, his black wit and self-deprecation are reliably present, and he delights in reminding us that “literature will lose, sunlight will win, don’t worry.”But in this book, literature wins as well. God’s Silence is a deeply felt celebration of what poetry (and its silences) can do for us.
Franz Wright was born in Vienna in 1953 and grew up in the Northwest, the Midwest, and Northern California. His most recent works include Ill Lit: Selected & New Poems, The Beforelife (a finalist for the Pulitzer Prize), and Walking to Martha’s Vineyard (which won the Pulitzer Prize for poetry). He has been the recipient of two National Endowment for the Arts grants, a Guggenheim Fellowship, a Whiting Fellowship, and the PEN/Voelcker Prize, among other honors. He lives in Waltham, Massachusetts, with his wife, the translator and writer Elizabeth Oehlkers Wright.