Waging a Good War: A Military History of the Civil Rights Movement, 1954-1968 (Hardcover) 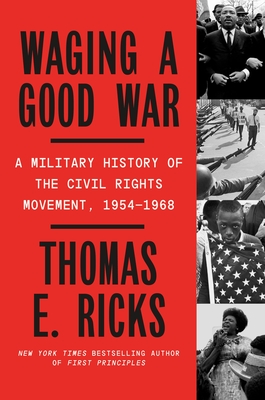 Waging a Good War: A Military History of the Civil Rights Movement, 1954-1968 (Hardcover)

#1 New York Times bestselling author and Pulitzer Prize winner Thomas E. Ricks offers a new take on the Civil Rights Movement, stressing its unexpected use of military strategy and its lessons for nonviolent resistance around the world.

“Ricks does a tremendous job of putting the reader inside the hearts and souls of the young men and women who risked so much to change America . . . Riveting.” —Charles Kaiser, The Guardian

In Waging a Good War, the bestselling author Thomas E. Ricks offers a fresh perspective on America’s greatest moral revolution—the civil rights movement of the 1950s and 1960s—and its legacy today. While the Movement has become synonymous with Martin Luther King, Jr.’s ethos of nonviolence, Ricks, a Pulitzer Prize–winning war reporter, draws on his deep knowledge of tactics and strategy to advance a surprising but revelatory idea: the greatest victories for Black Americans of the past century were won not by idealism alone, but by paying attention to recruiting, training, discipline, and organization—the hallmarks of any successful military campaign.

An engaging storyteller, Ricks deftly narrates the Movement’s triumphs and defeats. He follows King and other key figures from Montgomery to Memphis, demonstrating that Gandhian nonviolence was a philosophy of active, not passive, resistance—involving the bold and sustained confrontation of the Movement’s adversaries, both on the ground and in the court of public opinion. While bringing legends such as Fannie Lou Hamer and John Lewis into new focus, Ricks also highlights lesser-known figures who played critical roles in fashioning nonviolence into an effective tool—the activists James Lawson, James Bevel, Diane Nash, and Septima Clark foremost among them. He also offers a new understanding of the Movement’s later difficulties as internal disputes and white backlash intensified. Rich with fresh interpretations of familiar events and overlooked aspects of America’s civil rights struggle, Waging a Good War is an indispensable addition to the literature of racial justice and social change—and one that offers vital lessons for our own time.

Thomas E. Ricks is the author of multiple bestselling books, including First Principles, The Generals, and Fiasco, which was a #1 New York Times bestseller and a finalist for the Pulitzer Prize. A member of two Pulitzer Prize–winning teams in his years at The Washington Post and The Wall Street Journal, he has been called “the dean of military correspondents.” He lives in Maine and Texas.

"The greatest value of this compelling account lies in its capacity to remind us how a relatively small group of intelligent, determined, disciplined and incredibly courageous men and women managed after barely a decade of pitched battles to transform the US 'into a genuine democracy' for the very first time . . . Ricks does a tremendous job of putting the reader inside the hearts and souls of the young men and women who risked so much to change America . . . Riveting." —Charles Kaiser, The Guardian

"With a keen eye for evocative detail and memorable quotation, Ricks condenses detailed studies into succinct and vivid chronicles that he strings together into an accessible narrative . . . With sympathy and verve, Ricks [. . .] describes other episodes in which racial dissidents broadened the boundaries of racial fairness . . . A commendable feature of Waging a Good War is Ricks’s level-headed assessment of the tactics of both those who insisted upon nonviolence and those who, in the latter part of the 1960s, increasingly indulged in violent rhetoric and posturing." —Randall Kennedy, The American Prospect

"[A] vigorous retelling of what historians have come to call the [civil rights] movement’s 'classic phase' . . . An intriguing analogy swept along by Ricks’s impressive storytelling skills." —Kevin Boyle, The Washington Post

"Ricks draws an elaborate parallel between the movement and a military campaign, finding common strengths in their shared emphases on training, discipline, logistics, planning and strategy . . . Valuable . . . His focus prompts Mr. Ricks to look past protests and speeches to the rigor, patience and vision that made them succeed." —The Economist

"[Ricks] has a different question in his new book, Waging a Good War: How did they win[?] . . . Ricks shows us how to get from bravery to victory . . . This book is Ricks's contribution; the rest of us are morally bound to find our own lunch counters to claim." —Debra Dickerson, Washington Monthly

"[A] penetrating study . . . Ricks’s military metaphors . . . incisively spotlight the nuts and bolts of the movement’s achievements: meticulous planning and organizing, shrewd analysis of goals and the means to accomplish them, maintenance of discipline and morale, and cold-blooded realism. The result is a trenchant and stimulating guide to the strategies and tactics that can achieve sweeping social change." —Publishers Weekly

"Thomas E. Ricks gives us a new way to understand the civil rights movement in his illuminating, engrossing, deeply researched and vividly written Waging a Good War . . . If you want to understand how the people of the civil rights movement went about changing the United States in the 1950s and ’60s, this is the book to read." —BookPage (starred review)

"A novel interpretation . . . [and] a thoughtful contribution to the history of the struggle for civil rights in America." —Kirkus Reviews

"I loved this book, learned a lot, and enjoyed it from start to finish. Ricks brings the American civil rights movement vividly to life. Through his smartly conceived perspective, we better understand the movement’s vision, discipline, and conduct as it fought for the soul of America." —James Mattis, retired United States Marine Corps General, 26th US Secretary of Defense, and co-author of Call Sign Chaos: Learning to Lead

"Waging a Good War is a stirring, sobering military after-action report for the civil rights movement from one of the country’s most readable and astute military historians. Is it worth closely scrutinizing how training, doctrine, unit discipline, logistics, and strategic planning were fundamental to the Movement’s success? Emphatically, yes. For these are the means by which power is forged and the world changed, and how can any citizen seeking a healthy democracy in our troubled times not wish to understand that better?" —Danielle Allen, author of Our Declaration and Cuz

“In a book that is both comprehensive and compelling, Ricks examines a critical period in our country’s history and shows how the strategic approach employed by civil rights leaders in the 1950s and 60s advanced American democracy. A central theme emerging from this sweeping narrative is that struggle and purposeful action are key elements of social change and that democracy warrants these efforts.” —Freeman A. Hrabowski III, president of the University of Maryland, Baltimore County, former chair of President Obama's President’s Advisory Commission on Educational Excellence for African Americans, and author of The Empowered University

"All of Thomas Ricks's military histories are brilliantly insightful, vivid, and full of heart, but Waging A Good War, the first military history of the civil rights movement, is my favorite. Extraordinary, heartbreaking, and illuminating, the book casts a bright new light on how the Movement worked as a benevolent campaign, with great heroes waging war against the great evil we know." —Anne Lamott, author of Dusk, Night, Dawn: On Revival and Courage and Bird by Bird

“We've long known what the people of the civil rights movement did; they changed America and then the entire world. Now, we can know how they did it. This book outflanks our ‘memory’ of the Movement by detailing, for example, the activist nature of Gandhi's non-violence, with camouflaged ‘fire control officers’ orchestrating the waves of well-trained protestors refilling each lunch counter seat as quickly as the mob emptied it. The Highlander Folk School trained their ‘generals,’ while ‘basic training’ sites on Southern Black campuses and churches prepared the rank and file. This work shows all this without in any way minimizing the multi-hued bravery and sacrifice required to end Black Americans' de jure second class citizenship. This is the book we who stand in awe of the Movement didn't know we were waiting for—but we were.” —Debra J. Dickerson, former Air Force intelligence officer and author of An American Story and The End of Blackness: Returning the Souls of Black Folk to Their Rightful Owners

“Tom Ricks’ Waging a Good War is first of all, a superb account of the Civil Rights Movement in the United States from 1954 to 1968. Equally noteworthy are Ricks’ deep military analyses and reflections on the campaigns and battles fought by African Americans, many of whom were World War II veterans, to achieve ‘a genuine democracy’ in America. Finally Ricks’ most recent work is a great read, insightful, enjoyable, and informative. Highly recommended.” —Adrian R. Lewis, David B. Pittaway Professor of Military History at the University of Kansas and author of The American Culture of War

"In Waging a Good War, Thomas Ricks offers a vivid, compelling, and entirely new view of one of the most important human accomplishments in history. An acclaimed military historian and superior writer, Ricks brilliantly deploys the lens of military 'campaigns' to help the reader better grasp the strategic and tactical actions of the civil rights movement's leaders. Ironically, but crucially, his use of a military framework offers a profound understanding of a nonviolent movement that ultimately won the battle against hatred and violence." —James Martin, SJ, author of Jesus: A Pilgrimage

"Thomas Ricks’s chronicle of the civil rights movement is a timely reminder that Americans have the collective capacity to correct course and redeem democracy’s promise. Against seemingly insurmountable odds, Black citizens mobilized in a sustained, hard-fought struggle to make America a better place for all its citizens. Waging a Good War is a distinguished military historian’s inspiring tribute to the Movement’s discipline and self-sacrifice, strategic vision and tactical genius." —Peter S. Onuf, professor of history emeritus at the University of Virginia and co-author with Annette Gordon-Reed of Most Blessed of the Patriarchs