Genesis: The Story of How Everything Began (Hardcover) 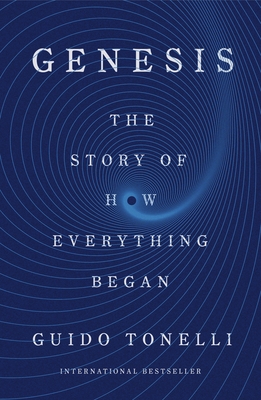 Genesis: The Story of How Everything Began (Hardcover)

A breakout bestseller in Italy, now available for American readers for the first time, Genesis: The Story of How Everything Began is a short, humanistic tour of the origins of the universe, earth, and life—drawing on the latest discoveries in physics to explain the seven most significant moments in the creation of the cosmos.

Curiosity and wonderment about the origins of the universe are at the heart of our experience of the world. From Hesiod’s Chaos, described in his poem about the origins of the Greek gods, Theogony, to today’s mind-bending theories of the multiverse, humans have been consumed by the relentless pursuit of an answer to one awe inspiring question: What exactly happened during those first moments?

Guido Tonelli, the acclaimed, award-winning particle physicist and a central figure in the discovery of the Higgs boson (the “God particle”), reveals the extraordinary story of our genesis—from the origins of the universe, to the emergence of life on Earth, to the birth of human language with its power to describe the world. Evoking the seven days of biblical creation, Tonelli takes us on a brisk, lively tour through the evolution of our cosmos and considers the incredible challenges scientists face in exploring its mysteries. Genesis both explains the fundamental physics of our universe and marvels at the profound wonder of our existence.

Guido Tonelli is an Italian particle physicist who played a key role in the discovery of the Higgs boson, the so-called God particle, which earned François Englert and Peter Higgs the 2013 Nobel Prize in Physics. For his contributions to the field, Tonelli was made a commendatore of the Order of Merit of the Italian Republic in 2012 and was awarded the Enrico Fermi Prize from the Italian Physical Society and the $3 million Special Breakthrough Prize in Fundamental Physics. He is a professor of general physics at the University of Pisa and a visiting scientist at the European Organization for Nuclear Research (CERN).

"Spellbinding . . . For Tonelli, everything in the evolution of the Universe, culture and the human condition follows from the need to understand our origins. Stories allow us to make sense of the void from which all things began. It is fitting that his own story is complex, mysterious and, at times, even messy — a bit like the Universe itself."
— Andrea Taroni, Nature

"Read [Guido Tonelli's] mind-inflating book . . . Genesis is suffused with the language and lessons of myth, so much of which we’re only now catching up to. In a way, that’s what science is for: to prove the stories true."
—Jason Kehe, Wired (9 Books You Need to Read This Summer)

"Mr. Tonelli’s own take on the creation story, a scientific summary of 13.8 billion years of cosmic history—the author divides the seven “days” into very unequal time-steps, from the big bang to the appearance of planets able to support life."
— Andrew Crumey, The Wall Street Journal

"Tonelli takes the reader on the most thrilling roller-coaster ride, starting with the void and ending 13.8 billion years later with the complex multiverse we currently inhabit. Neatly divided into seven chapters corresponding to different cosmological epochs, this is the modern-day Genesis narrative told by a master story teller."
—Marcus du Sautoy, author of The Music of the Primes

“The scientific story of the origin and evolution of our universe is much like a collection of the brittle scrolls of some ancient philosopher. We have mere fragments, enough to be sure that this is the one great poem of the universe, but tantalisingly incomplete. In Genesis, Guido Tonelli guides us expertly through what we know, what we don’t know, and what we can only guess. You will find poetry here, and a strong sense of wonder and awe.”
—Jim Baggott, author of Origins and Quantum Reality

“From his descriptions of the Big Bang to human creativity and storytelling, [Guido Tonelli’s] writing is lush and inviting, offering countless points of entry . . . In a concise yet action-packed narrative, [he] organizes his survey of the cosmic beginnings into seven days, mimicking the biblical timeline of creation . . . With clarity and just the right amount of technical language, Tonelli tackles complex subjects such as supersymmetry, dark matter, and the births of stars and planets.”
—Kirkus Reviews (starred review)

“Einstein meets Ovid in Tonelli’s compelling account of how the universe was born and how it has since evolved. Grounded in theoretical science but sustained by artistic fervor, this account not only illuminates the precepts of modern cosmology for nonspecialists, but also endows those precepts with rare imaginative power . . . Readers will thrill at the opportunity to accompany a world-class physicist to the frontiers of cosmological science, there to contemplate the unfolding of the universe and to gauge the dazzling new technologies enabling scientists to scrutinize that unfolding."
—Booklist (starred review)

"Tonelli’s lyrical story of creation is sure to ignite the imaginations of American readers."
—Publishers Weekly