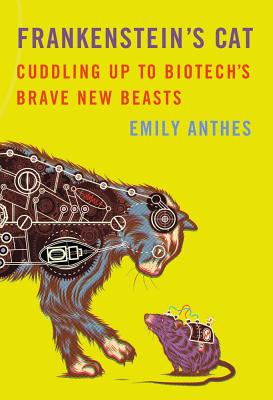 By Emily Anthes
$26.00
Availability to be confirmed

For centuries, we've toyed with our creature companions, breeding dogs that herd and hunt, housecats that look like tigers, and teacup pigs that fit snugly in our handbags. But what happens when we take animal alteration a step further, engineering a cat that glows green under ultraviolet light or cloning the beloved family Labrador? Science has given us a whole new toolbox for tinkering with life. How are we using it?

In Frankenstein's Cat, the journalist Emily Anthes takes us from petri dish to pet store as she explores how biotechnology is shaping the future of our furry and feathered friends. As she ventures from bucolic barnyards to a "frozen zoo" where scientists are storing DNA from the planet's most exotic creatures, she discovers how we can use cloning to protect endangered species, craft prosthetics to save injured animals, and employ genetic engineering to supply farms with disease-resistant livestock. Along the way, we meet some of the animals that are ushering in this astonishing age of enhancement, including sensor-wearing seals, cyborg beetles, a bionic bulldog, and the world's first cloned cat.

Through her encounters with scientists, conservationists, ethicists, and entrepreneurs, Anthes reveals that while some of our interventions may be trivial (behold: the GloFish), others could improve the lives of many species-including our own. So what does biotechnology really mean for the world's wild things? And what do our brave new beasts tell us about ourselves?

With keen insight and her trademark spunk, Anthes highlights both the peril and the promise of our scientific superpowers, taking us on an adventure into a world where our grandest science fiction fantasies are fast becoming reality.

EMILY ANTHES is a freelance science journalist. Her work has appeared in Seed, Scientific American Mind, Discover, Slate, Good, New York, and the Boston Globe. She has a master's degree in science writing from MIT and a bachelor's degree in the history of science and medicine from Yale, where she also studied creative writing. She is the author of Frankenstein's Cat: Cuddling Up to Biotech's Brave New Beasts. She lives in Brooklyn, New York.

“[Frankenstein's Cat is] far more than just a fascinating read about animal manipulation. As it touches the third rail of ‘manipulating Nature,' which seems to irritate non-religious liberals as much as evangelicals, its implications go far beyond controversies associated with animal biotechnology to the ethics of "positive eugenics" in humans. [Anthes] colorfully explores all the fascinating and in some cases gruesome ways humans are reshaping the animal kingdom . . . she thoughtfully pleas for reasoned contemplation and discussion rather than knee jerk reactions.” —Forbes

“Genetically engineered glow-in-the-dark fish for your fish tank. Cyborg beetles concocted by the Defense Department. Five hundred different strains of transgenic mice caged in a Chinese laboratory. Science journalist Emily Anthes has a knack for ferreting out such eyebrow-raising specimens, and she makes the details of her complex subject matter highly readable in Frankenstein's Cat.” —The Washington Post

“Anthes, a gifted science writer who lives with her cavapoo Milo, takes us on a journey from "petri dish to pet store" and beyond . . . this is a serious book with a light touch.” —Bloomberg

“A witty exploration of the many ways in which humans are reshaping animal bodies in the twenty-first century . . . an entertaining, intelligent book that casts new light on the shady gulf between man and beast.” —Nature

“A profoundly hopeful and often funny book about how the dividing line between human, animal and machine isn't as clear as you might think . . . This is a must for animal lovers, as well as anyone curious about the future of biology.” —io9.com

“Fascinating . . . A heartwarming chapter is devoted to the dolphin Winter, whose injured tail was replaced with a prosthetic one . . . with legislation regulating the animal biotech industry highly inconsistent . . . Anthes eloquently explores the arguments framing the debate.” —Nautilus

“Charming . . . the science is accessible and so, mercifully, is the ethics… a breezy introduction to a complex and controversial issue." Four stars.” —BBC Focus

“Witty and intelligent . . . If Anthes had simply opted to flit from one biotech vignette to the next, Frankenstein's Cat would be impressive enough. But she gives us much, much more, straying at every turn to reflect on historical precedents to these brave new beasts and to ponder the troublesome philosophical and ethical questions they raise.” —BBC Wildlife

“[Anthes] has a gift for blending reputable science with humorous anecdotes in a sparkling writing style that makes reading this book a real delight . . . The book bubbles with provocative bioscience and fascinating examples of important advances that are presented in a witty and absorbing fashion. You will be introduced to a wide range of emerging technology that has compelling applications to future health care . . . It is a gem of a book . . . pick it up and enjoy a peek into this brave new world of biotechnology!” —Oncology Times

“A lively, engaging, and intensely researched overview of where animal science has gone in recent decades and where it might go. All who value both human and animal welfare may think it worth their while to give it a read.” —The Futurist

“The great merit of Frankenstein's Cat is its balance. It could have been a gee-whiz paean to the genius of genetic engineers. It could have been a soulless expose of the bizarre features of its subject. It could have been a cry of fright at the possibilities unleashed by scientists in this field. Anthes, often humorous but never insensitive, portrays their products neither as masterpieces nor as monsters. What she does say, in many different ways, is that we must understand the consequences of genetic engineering and be prepared for them practically, philosophically and ethically--not after the startling and perhaps irreversible fact, but in advance.” —The Valley Advocate (Massachusetts)

“An elegant tour of the wild and fraught sideshow of animal biotechnology . . . Learned, entertaining and illuminating.” —Kirkus Reviews

“The book is a quick, often surprising review of current advances, giving accessible treatment to a weighty subject and employing clear descriptions of complex science. Anthes not only explores what is being done but also asks why and if it should be done. Along the way, the book reveals much about humans and our connections to animals and the world we all inhabit.” —Booklist

“Animals are fascinating if reluctant soldiers in the biotech revolution, writes journalist Anthes in this witty and thought-provoking book.” —Publishers Weekly

“With wit, high intelligence, and a lively writing style, Anthes portrays the new world of biotechnology—in which we control the bodies and brains of other animals—and the moral and philosophical issues so raised.” —Alan Lightman, bestselling author of Einstein’s Dreams

“Frankenstein's Cat is smart, lucid, and full of surprises. There was hardly a page that didn't contain something new or unexpected.” —Anne Fadiman, National Book Critics Circle Award-winning author of The Spirit Catches You and You Fall Down

“Smart, funny and deep: Frankenstein’s Cat is a report from the frontiers of the scientific campaign to re-engineer animals to fulfill human desires. At the same time Anthes, whose love of animals shines through on every page, takes her readers on a rich and challenging quest of self-discovery: what rights do the animal objects of our creativity possess—and what obligations to them and to ourselves must we accept as we reshape (again!) the living world? A great read.” —Thomas Levenson, Professor of Science Writing, Massachusetts Institute of Technology, and author of Newton and the Counterfeiter

“Emily Anthes gets the balance just right . . . There are brilliant stories of the entrepreneurs who want to bring glowing fish and remote controlled cockroaches to market, contrasted with the potentially lifesaving work of ‘pharmed' animals modified to produce medicine in their milk . . . Always enjoyable, a page-turner of a popular science book with a surprise around every corner.” —Brian Clegg, author of Inflight Science and The Universe Inside You