The Economics of Empire: Genealogies of Capital and the Colonial Encounter (Postcolonial Politics) (Hardcover) 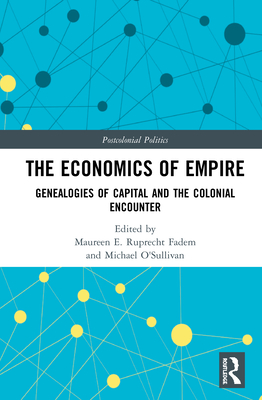 By Maureen E. Ruprecht Fadem (Editor), Michael O'Sullivan (Editor)
Questions about availability for this title? Ask us here!
To Order - Usually Arrives in 1-5 Days
This book cannot be returned

The Economics of Empire: Genealogies of Capital and the Colonial Encounter is a multidisciplinary intervention into postcolonial theory that constructs and theorizes a political economy of empire.

This comprehensive collection traces the financial genealogies associated with the colonial enterprise, the strategies of economic precarity, the pedigrees of capital, and the narratives of exploitation that underlay and determined the course of modern history. One of the first attempts to take this approach in postcolonial studies, the book seeks to sketch the commensal relation--a symbiotic "phoresy"--between capitalism and colonialism, reading them as linked structures that carried and sustained each other through and across the modern era. The scholars represented here are all postcolonial critics working in a range of disciplines, including Political Science, Sociology, History, Peace and Conflict Studies, Legal Studies, and Literary Criticism, exploring the connections between empire and capital, and the historical and political implications of that structural hinge. Each author engages existing postcolonial and poststructuralist theory and criticism while bridging it over to research and analytic lenses less frequently engaged by postcolonial critics. In so doing, they devise novel intersectional and interdisciplinary frameworks through which to produce more greatly nuanced understandings of imperialism, capitalism, and their inextricable relation, "new" postcolonial critiques of empire for the twenty-first century.

This book will be an excellent resource for students and researchers of Postcolonial Studies, Literature, History, Sociology, Economics, Political Science and International Studies, among others.

Maureen E. Ruprecht Fadem is Associate Professor of English at The City University of New York/Kingsborough, USA. She also teaches at Drew University, USA, and at The Graduate Center, CUNY, USA. Michael O'Sullivan is Associate Professor in the Department of English at the Chinese University of Hong Kong. He has taught on literature and language in universities in Ireland, the UK, the USA, Japan, and Hong Kong.