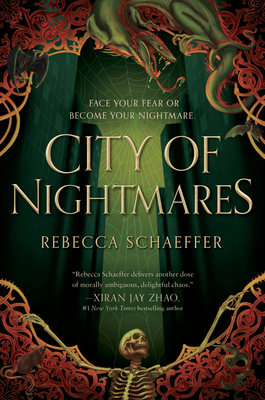 Gotham meets Strange the Dreamer in this thrilling young adult fantasy about a cowardly girl who finds herself at the center of a criminal syndicate conspiracy, in a city where crooked politicians and sinister cults reign and dreaming means waking up as your worst nightmare.

Ever since her sister became a man-eating spider and slaughtered her way through town, nineteen-year-old Ness has been terrified—terrified of some other Nightmare murdering her, and terrified of ending up like her sister. Because in Newham, the city that never sleeps, dreaming means waking up as your worst fear.

Whether that means becoming a Nightmare that’s monstrous only in appearance, to transforming into a twisted, unrecognizable creature that terrorizes the city, no one is safe. Ness will do anything to avoid becoming another victim, even if that means lying low among the Friends of the Restful Soul, a questionable organization that may or may not be a cult.

But being a member of maybe-cult has a price. In order to prove herself, Ness cons her way into what’s supposed to be a simple job for the organization—only for it to blow up in her face. Literally. Tangled up in the aftermath of an explosive assassination, now Ness and the only other survivor—a Nightmare boy who Ness suspects is planning to eat her—must find their way back to Newham and uncover the sinister truth behind the attack, even as the horrors of her past loom ominously near.

Rebecca Schaeffer is the critically acclaimed author of Not Even Bones, Only Ashes Remain, and When Villains Rise. The Webtoon adaptation of the trilogy has garnered over a hundred million reads and nearly 2 million subscribers. Her next book, City of Nightmares, comes out in 2023.

“So much fun readers will stay up all night to finish it.” — Kirkus Reviews (starred review)

"One of my favorite books of the year! Phenomenally fun, with a vivid, vicious world that's stuffed with monsters (both human and otherwise) and a heroine you'll root for. I absolutely loved it!"   — Sarah Beth Durst, award-winning author of The Queens of Renthia series

"Thrilling, atmospheric and wonderfully original! In a world where people become their worst nightmares, Ness has to contend with explosions, monsters, assassins – and a cute vampire boy! Rebecca Schaeffer’s City of Nightmares is a page-turning read full of twists and mysteries. I loved it!"
— Vanessa Len, author of Only A Monster

"Readers will welcome this is a series opener, as there is still far more to explore in this world that is mostly bleak but with just enough hope to make the bitter sweet." — Bulletin of the Center for Children’s Books