You Call This Democracy?: How to Fix Our Government and Deliver Power to the People (Paperback) 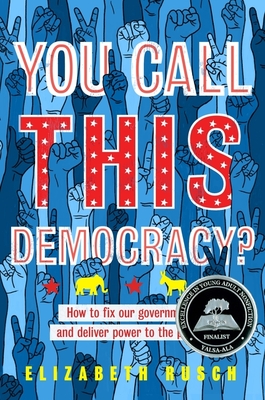 You Call This Democracy?: How to Fix Our Government and Deliver Power to the People (Paperback)

This book is a perfect reminder that our system is, if not broken, perhaps a bit bent out of shape. Why does the person who got the most votes not win the election? Why is your district shaped like an ink blot test? Why are more than 4 million of our friends and neighbors permanently barred from participating in the democratic process? This book explains all that and more, with plenty of helpful infographics!

America is the greatest democracy in the world . . . isn't it? Author Elizabeth Rusch examines some of the more problematic aspects of our government but, more importantly, offers ways for young people to fix them.

The political landscape has never been so tumultuous: issues with the electoral college, gerrymandering, voter suppression, and a lack of representation in the polls and in our leadership have led to Americans of all ages asking, How did we get here?

The power to change lies with the citizens of this great country—especially teens! Rather than pointing fingers at people and political parties, You Call This Democracy? looks at flaws in the system—and offers a real way out of the mess we are in. Each chapter breaks down a different problem plaguing American democracy, exploring how it’s undemocratic, offering possible solutions (with examples of real-life teens who have already started working toward them), and suggesting ways to effect change—starting NOW!

Liz Rusch lives in Portland, Oregon, with her husband, two terrific kids, and one very funny, quirky dog named Reba. She has written more than 100 magazine articles and more than a dozen acclaimed children’s books, including picture books, middle grade, fiction, nonfiction and even a graphic novel.

“You Call This Democracy gives us a clear look at the problems we face in our politics today, from voter suppression to gerrymandering to sorting through the noise of partisanship. Most importantly, it provides a road map for how we can come together and use our power as citizens to fix them. As we enter into an election year where nothing less than the fate of our republic is at stake, this book is an important read for anyone interested in our politics.”—Hillary Rodham Clinton   "Fascinating....Like many well-executed books written for smart teenagers, YOU CALL THIS DEMOCRACY? is enlightening for adults as well.”—The New York Times Book Review   ★ "Rusch unites a passion for democracy with a belief in the power of young people to help restore it. A riveting must-read."—Kirkus, STARRED review    "[A]n elucidating call to action, one chock full of engaging explanations, examples, charts, graphs, quotes, and names of activist groups focused on revising politically charged plots to undermine democratic processes."—Booklist   "[A] sprawling, information-rich exploration of the current state of American democracy."—School Library Journal —