The Vanderbeekers Make a Wish (Hardcover) 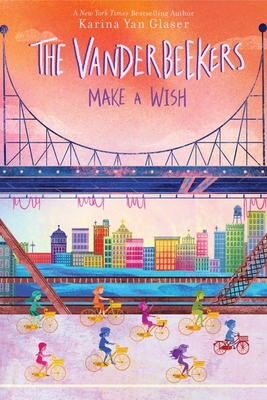 The Vanderbeekers Make a Wish (Hardcover)

This is book number 5 in the The Vanderbeekers series.

I can not get over how much fun the Vanderbeeker family is! This is the fifth installment in a series about siblings working together, helping friends and neighbors, and exploring in New York City. Great for a family read aloud and something to love for all ages.

Witness the power of family history and family love in this funny, poignant addition to a series that the New York Times Book Review hails as “delightful and heartwarming.”

It’s summer on 141st Street, and the Vanderbeekers are looking forward to Papa’s surprise fortieth birthday party. But when Papa must leave town suddenly to help his best friend, trouble in the form of their distant grandparents shows up on their doorstep.

Not only must the Vanderbeekers face the disappointment of ruined plans, but they have more than one family secret to solve if they are going to give Papa the special birthday he deserves.

Karina Glaser is the New York Times best-selling author of The Vanderbeekers series. A former teacher as well as employee of New York City's largest provider of transitional housing for the homeless, Karina is now a contributing editor at Book Riot. Karina lives in Harlem, New York City, with her husband, two daughters, and an assortment of rescue animals. One of her proudest achievements is raising two kids who can’t go anywhere without a book. Visit her at karinaglaser.com

"Another adorable kid-centered adventure in Glaser's successful and endearing series. Lovers of Jeanne Birdsall's 'Penderwick' series will find real comfort in Glaser's characters and situations. This latest in a staple series is a must for any middle grade collection." — School Library Journal