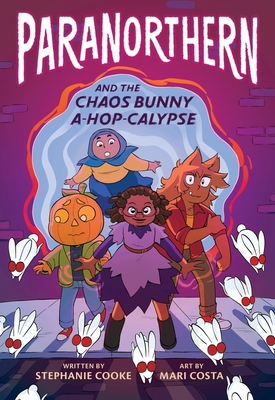 “Absolutely sweet graphic novel about a girl with fledgling magic powers that seem stronger than they should be. With evil bunnies, a wolf girl, a forgetful ghost, and a pumpkinhead looking for some basic rights for pumpkins! Charming and fun and I was smiling the whole time.”
— Cass Moskowitz, Books of Wonder, NEW YORK, NY

This irresistibly charming story follows a group of supernatural kids as they try to reverse a magical mishap while learning to embrace what makes them unique. Lovable characters, funny moments, adorable artwork, and a creative magical setting makes this a stand-out!

— RJ
A witch named Abby and her three friends—a wolf-girl, a ghost, and a pumpkinhead—band together to try and save their supernatural town from an invasion of rabid (but adorable!) chaos bunnies in this enchanting middle-grade graphic novel for fans of Making Friends, The Okay Witch, and Lumberjanes.

It’s fall break in the supernatural town of North Haven, and young witch Abby’s plans include pitching in at her mom’s magical coffee shop, practicing her potion making, and playing board games with her best friends—a pumpkinhead, a wolf-girl, and a ghost. But when Abby finds her younger sister being picked on by some speed demons, she lets out a burst of magic so strong, it opens a portal to a realm of chaos bunnies. And while these bunnies may look cute, they’re about to bring the a-hop-ocalypse  (and get Abby in a cauldronful of trouble) unless she figures out a way to reverse the powerful magic she unwittingly released. What’s a witch to do?

In this deliciously humorous, cozy, and bewitching graphic novel, sometimes the most of powerful magic comes from our connections to family and friends (but kicking bunny butt is great, too).
Stephanie Cooke is an award-nominated writer and editor based out of Toronto, Canada. She’s a comic book fan, avid gamer, movie watcher, lover of music… and user of sarcasm. She is a purveyor of too many projects and thrives in chaos. Her writing work is featured in Millarworld Annual, The Secret Loves of Geek Girls, and Toronto Comics Anthology. Oh My Gods! is her debut graphic novel.


"Cooke’s pleasingly multifaceted characters...navigate internal struggles and engage in amusing rapport as they work to achieve their shared goal. In rich autumnal hues, illustrator Costa’s visuals reinforce a Halloweeny vibe in this supernatural story with an inclusive cast. Deeper messages include themes of belonging, close friend and family bonds, and learning to trust oneself."—Publishers Weekly   "The cartoon-style artwork and cozy fall colors set the tone for a fun and heartfelt adventure....An enjoyable story about magic, friendship, and being true to yourself."—Kirkus
— No Source