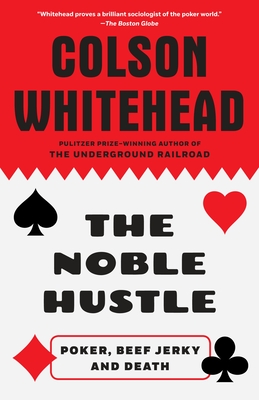 From the two-time Pulitzer Prize-winning author of The Underground Railroad and The Nickel Boys • “Whitehead proves a brilliant sociologist of the poker world.” —The Boston Globe

In 2011, Grantland magazine gave bestselling novelist Colson Whitehead $10,000 to play at the World Series of Poker in Las Vegas. It was the assignment of a lifetime, except for one hitch—he’d never played in a casino tournament before. With just six weeks to train, our humble narrator took the Greyhound to Atlantic City to learn the ways of high-stakes Texas Hold’em.

Poker culture, he discovered, is marked by joy, heartbreak, and grizzled veterans playing against teenage hotshots weaned on Internet gambling. Not to mention the not-to-be overlooked issue of coordinating Port Authority bus schedules with your kid’s drop-off and pickup at school. Finally arriving in Vegas for the multimillion-dollar tournament, Whitehead brilliantly details his progress, both literal and existential, through the event’s antes and turns, through its gritty moments of calculation, hope, and spectacle. Entertaining, ironic, and strangely profound, this epic search for meaning at the World Series of Poker is a sure bet.

Colson Whitehead is the Pulitzer-Prize winning author of The Underground Railroad. His other works include The Noble Hustle, Zone One, Sag Harbor, The Intuitionist, John Henry Days, Apex Hides the Hurt, and one collection of essays, The Colossus of New York. A National Book Award winner and a recipient of MacArthur and Guggenheim fellowships, he lives in New York City.

An NPR Best Book of the Year

“The Noble Hustle is fierce, funny and totally worth the buy-in.” —New York Daily News

“Whitehead proves a brilliant sociologist of the poker world.” —The Boston Globe

“[A] trenchant, ruefully funny memoir of one man’s attempt to dispel the banality of living with the anxiety of chance.” —USA Today

“Mordantly funny from the first sentence. . . . Mr. Whitehead may not have gone home in the money, but he has a way with upstanding sentences.” —The Economist

“Clever and entertaining.” —The Miami Herald

“[Whitehead’s] reporting on the grimy glitz of casinos and competitive gambling has a funny, tragic, loser-chic sensibility.” —The New Yorker

“A literary guide to the often bizarre world of casino-poker tournaments.” —The Wall Street Journal

“Whitehead captures the sketchy and zombielike nature of poker tournament play well enough to leave you wishing this book came with a free bottle of Purell.” —Entertainment Weekly

“From the first sentence to the last, Colson Whitehead never stops being clever. . . . If Whitehead played poker as well as he writes, he would have made the final table.” —The Philadelphia Inquirer

“A masterpiece of sportswriting.” —The Rumpus