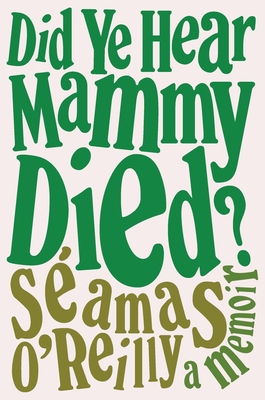 
On Our Shelves Now
“In this joyous, wildly unconventional memoir, Séamas O'Reilly tells the story of losing his mother as a child and growing up with ten siblings in Northern Ireland during the final years of the Troubles as a raucous comedy, a grand caper that is absolutely bursting with life.”―Patrick Radden Keefe, NYT bestselling author of Say Nothing and Empire of Pain

One of NPR’s Best Books of the Year

Séamas O’Reilly’s mother died when he was five, leaving him, his ten (!) brothers and sisters, and their beloved father in their sprawling bungalow in rural Derry. It was the 1990s; the Troubles were a background rumble, but Séamas was more preoccupied with dinosaurs, Star Wars, and the actual location of heaven than the political climate.
­
An instant bestseller in Ireland, Did Ye Hear Mammy Died? is a book about a family of loud, argumentative, musical, sarcastic, grief-stricken siblings, shepherded into adulthood by a man whose foibles and reticence were matched only by his love for his children and his determination that they would flourish.
Seamas O'Reilly is a columnist for the Observer and writes about media and politics for the Irish Times, New Statesman, Guts, and VICE. He lives in the London borough of Hackney with his family.
“In this joyous, wildly unconventional memoir, Séamas O'Reilly tells the story of losing his mother as a child and growing up with ten siblings in Northern Ireland during the final years of the Troubles as a raucous comedy, a grand caper that is absolutely bursting with life. Jostling with indelible characters and shot through with bittersweet longing, it is moving and mordantly hilarious, a love letter to the resilience (and the insanity) of family. I laughed, I cried -- but really.”—Patrick Radden Keefe, NYT bestselling author of Say Nothing and Empire of Pain

"I cannot stress enough how much I love this funny, adorable memoir. Not only hilarious, tender, absurd, delightful and charming, but written with such skill as to render it unforgettable."—Nina Stibbe, bestselling author of LOVE, NINA and REASONS TO BE CHEERFUL

“I laughed out loud reading Did Ye Hear Mammy Died, especially at the bits that recalled for me the way my own family laughs to keep from crying…It's rare to read about good fathers in memoirs, and O'Reilly's portrait…is hilarious and moving….It is this thread of refusal to be pitied, to have what happened to his family reduced to ‘a tawdry bit of sentimental fluff for people to tut along to and say how sad,’ that makes Did Ye Hear Mammy Died? so rousing. That it is also deadly funny is an extra treat.”—NPR

"A gorgeous piece of work. Thoughtful and charming, it’s a book that sprouts abundant humour from one of Ireland’s most emotionally fertile past-times…grief.”—Chris O'Dowd

"Northern Ireland in the time of the Troubles is often cast into a narrative that doesn’t allow room for joy or delight...O’Reilly’s recollection is a splendid paradox, both cheery and heartbreaking."—Booklist, Starred

"Séamas’ memoir is delightful and horrifying, sometimes within the same sentence.”—Patton Oswalt

"I laughed until I choked, I cried BUCKETS, I have NEVER been so charmed, I fell in GIANT LOVE with Daddy O’Reilly. Seriously, this is a rare and beautiful book.”—Marian Keyes, internationally bestselling author of Watermelon and Lucy Sullivan Is Getting Married

“An almost improbable true story of an Irish man bringing up eleven (yes, eleven) children on his own, after his wife dies. Séamas is the ninth of these ‘half-orphans’ and he writes about his childhood and grief with such pathos and wit—even the chapter on his father’s love of dogs is exquisite. A gorgeous memoir.”—Pandora Skyes, author of How Do We Know We’re Doing It Right

"It's hard to imagine a memoir about an author's dead mother could elicit actual belly laughs, but somehow, O'Reilly makes it happen... what ultimately emerges in O'Reilly's recollections is never macabre. Instead, it is a tribute to the parents who raised him--his mother, by the legacy she left behind, and his father, in his sometimes strange and yet seemingly deliberate ways of caring for each of his children through their grief. Did Ye Hear Mammy Died? expertly combines heartfelt sentiment with a dry Irish wit that will leave readers questioning if the tears on their cheeks come from joy or sadness or dark humor--or all of the above."

"In this rollicking debut, O’Reilly, a columnist for the London Observer, weaves a hilarious look at his Irish Catholic childhood with a touching tribute to his mother...Chock-full of wit and compassion"—Publishers Weekly

“An actually laugh-out-loud funny and heartbreaking memoir about growing up with ten siblings and a widowed dad in 90s Derry.”—Emily Temple, LITERARY HUB

“Sometimes, a story hits hardest when told in the voice of the person who lived it. That’s the case with DID YE HEAR MAMMY DIED?...an equally lighthearted and profound examination of grief, family life and Northern Irish society against the backdrop of the waning years of the Troubles…It is disarming to find yourself laughing amid discussions of death, but O’Reilly’s sense of humor lands with the finality of a fruitcake hitting the kitchen floor. In a legato, Northern Irish timbre, O’Reilly nails the unreliability of memory… O’Reilly’s sketches are so visceral and intimate, you can almost imagine yourself as part of his tightknit community, too.”—Sebastian Modak, NEW YORK TIMES

“Séamas O’Reilly’s rousing grief memoir shuns sentimentality in favor of gallows humor. Its title comes from a favorite family tale: when O’Reilly was five, his mother died, leaving behind 11 (!) children. At the wake in their house in Northern Ireland, O’Reilly went around the crowd “like a chipper little maître’d, with the cheerful enquiry: ‘Did ye hear Mammy died?’” I laughed out loud reading this memoir – O’Reilly’s style and mining of family farce recall David Sedaris, but with a Derry bent.”

—NPR, Best Books of the Year