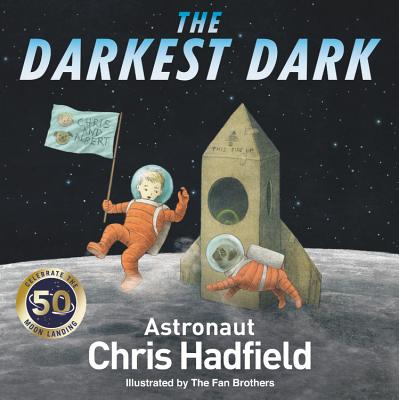 By Chris Hadfield, Kate Fillion (With), The Fan Brothers (Illustrator)


Special Order - Usually Arrives in 1-5 Days
Inspired by the childhood of real-life astronaut Chris Hadfield and brought to life by Terry and Eric Fan's lush, evocative illustrations, The Darkest Dark will encourage readers to dream the impossible.

Chris loves rockets and planets and pretending he's a brave astronaut, exploring the universe. Only one problem--at night, Chris doesn't feel so brave. He's afraid of the dark.

But when he watches the groundbreaking moon landing on TV, he realizes that space is the darkest dark there is--and the dark is beautiful and exciting, especially when you have big dreams to keep you company.
Chris Hadfield is one of the most seasoned and accomplished astronauts in the world. In May 2013, Hadfield returned to Earth after serving as Commander of the International Space Station, where he and his crew lived for five months (his third mission). Chris frequently speaks to audiences throughout the US and Canada about space exploration and science education.

Terry Fan received his formal art training at Ontario College of Art and Design in Toronto. His work is a blend of traditional and contemporary techniques, using ink or graphite mixed with digital. He spends his days (and nights) creating magical paintings, portraits, and prints. Together with his brother Eric, he wrote and illustrated the critically-acclaimed picture book, The Night Gardener.

Eric Fan is an artist and writer who lives in Toronto, Canada. He attended the Ontario College of Art and Design where he studied illustration, sculpture, and film. He has a passion for vintage bikes, clockwork contraptions, and impossible dreams. His widely-praised debut picture book, The Night Gardener, was a collaboration with his brother Terry.
Praise for The Darkest Dark:* "The Fan brothers (The Night Gardener) switch easily between fantasy elements and documentary images...The idea that a famous astronaut was once afraid of the dark may win some recalcitrant bed-goers' hearts, and readers with dreams of space travel will jump at this."—Publishers Weekly (starred review)