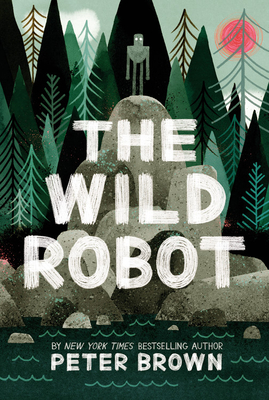 This is book number 1 in the The Wild Robot series.

Can a robot survive in the wilderness?

When robot Roz opens her eyes for the first time, she discovers that she is all alone on a remote, wild island. She has no idea how she got there or what her purpose is--but she knows she needs to survive. After battling a violent storm and escaping a vicious bear attack, she realizes that her only hope for survival is to adapt to her surroundings and learn from the island's unwelcoming animal inhabitants.

As Roz slowly befriends the animals, the island starts to feel like home--until, one day, the robot's mysterious past comes back to haunt her.

"Brown has written a lively tale that is sure to engage young readers."—The New York Times

"Roz may not feel emotions, but young readers certainly will as this tender, captivating tale unfolds."—The Washington Post

* "While the end to Roz's benign and wildlife is startling and violent, Brown leaves Roz and her companions--and readers--with hope. Thought-provoking and charming."—Kirkus Reviews, starred review

* "Brown's middle-grade debut, an uplifting story about an unexpected visitor whose arrival disrupts the animal inhabitants of a rocky island, has a contemporary twist...Brown wisely eschews a happy ending in favor of an open-ended one that supports the tone of a story that's simultaneously unsentimental and saturated with feeling."—Publishers Weekly, starred review

"Roz is not easy to forget."—The Horn Book